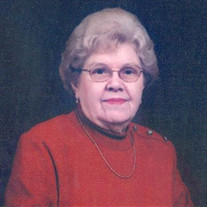 Agnes S. Christensen RACINE - Agnes S. Christensen, 96, passed away at Ridgewood Care Center on Thursday, June 21, 2018. She was born in McCabe, MT on October 27, 1921 to the late Julius and Marie (nee: Hoffman) Hansen. She attended high school in Milroy, MN. On July 15, 1944, Agnes was united in marriage to Gilbert Christensen. She worked as a binder for Western Publishing for 34 years, retiring in 1984. She enjoyed traveling with her friends on bus trips. Agnes was an active member of Holy Communion Lutheran Church. Agnes is survived by her children; Barbara (Bob) Medlin of Racine, and Ronald (Marty) Christensen of Franksville; grandchildren, Michelle (Jeremy) Clinton, Nancy (Vinnie) Smith, Beth (Kelly) Schweiner, Nicole (Eric) Zabler, and Amanda Christensen; great grandchildren, Devon, Ashley, Emmett and Nora. She is further survived by nieces, nephews, other relatives and friends. Agnes was preceded in death by her parents, husband, Gilbert on July 25, 1985, her five brothers, and one sister. Funeral services for Agnes will be held at Sturino Funeral Home on Tuesday, June 26, 2018 at 1 p.m. There will be a visitation at the funeral home before services from 12 noon until time of service. She will be laid to rest next to her husband at Graceland Cemetery. In lieu of flowers, memorials to Holy Communion Lutheran Church have been suggested by the family. A special thank you to Dr. Zablotney, Hospice Alliance and Ridgewood Care Center, especially the staff on 2 East.

The family of Agnes S. Christensen created this Life Tributes page to make it easy to share your memories.

Send flowers to the Christensen family.