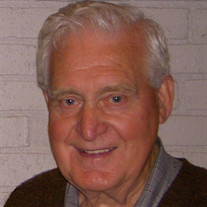 Alvin L. Svendsen passed away peacefully on January 7, 2020 at the age of 90. Al was born June 27, 1929 on the family farm near Superior, NE to Marius and Marie Svendsen. He attended a one-room country school before going on to graduate from Superior High School where he was a two-way starter for the Wildcats football team. He was the first in his family to go to college, graduating from Dana College in Blair, NE with a Degree in History. After college he served 3 years in the US Army with the Military Intelligence Department stationed in Ft. Riley, KS. On March 27, 1953 he was married to Janet L. Anderson at Emmaus Lutheran Church in Racine. They remained married for 52 years until her death in 2005. Upon relocating to Racine he went into business with his father-in-law Victor Anderson building homes, and later worked for the Brannum Lumber Co. Al was an active member of Emmaus Lutheran Church, serving in many capacities including President of the Congregation, the Building Committee, Council member and Sunday School Teacher. Besides his wife Janet and parents, Al was preceded in death by his sisters Anina Jacobsen and Edith Juul, brothers Viggo, Ruben, Raymond and Einar. He is survived by his brother Vernon (Willine) of Racine, his children Sharon (Stephen) Wanvig of Burnsville, MN, John (JoLynn) of Ft. Collins, CO, Steven of Los Angeles, CA, Timothy (Rachel) of Sun Prairie, WI, his grandchildren, Kirk, Mitchell, Tyler, Sonya, Jason, Andrew, Lorna and Zachary and his great-grandchildren, Peyton, Harper, Scarlett, Stanley and Arthur, as well as many nieces, nephews and friends. Al lived life with a cheerful spirit and a grateful heart, always an encouragement to others, with great love for his family and an unwavering trust in the faithfulness of God. Funeral services will be held at Emmaus Church, 1925 Summit Ave, on Saturday, January 18, 2020 at 11 a.m. He will be laid to rest at West Lawn Memorial Park. There will be a visitation at the church from 10 a.m. until time of service. The family would like to extend a special thank you to Brookdale Care Community for their support and care at the end of Al's life.

Alvin L. Svendsen passed away peacefully on January 7, 2020 at the age of 90. Al was born June 27, 1929 on the family farm near Superior, NE to Marius and Marie Svendsen. He attended a one-room country school before going on to graduate from... View Obituary & Service Information

The family of Alvin L. Svendsen created this Life Tributes page to make it easy to share your memories.

Send flowers to the Svendsen family.