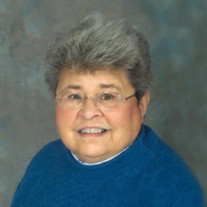 Anna Marie Rindfleisch FRANKSVILLE - Anna Marie Rindfleisch 63, passed away on June 29, 2020 at Hospice Alliance of Pleasant Prairie. She was the daughter of the James and Norene Rindfleisch, Jefferson, WI. Anna was born on March 19, 1957. She was baptized at St John’s Lutheran Church, Jefferson and confirmed in May 1971. After graduating from Jefferson High School in 1975, she then graduated from UW-Whitewater in 1979 with a degree in Special Education – Early Childhood. Anna taught in Belvidere, IL for one year, in 1980, she accepted a job teaching for Racine Unified School District and taught special needs preschoolers at Knapp Elementary and Garfield Elementary (Now Julian Thomas Elementary). She received her Master’s Degree in Classroom Guidance and Counseling from Carthage College in 1989. In 1994, she taught third grade at West Ridge Elementary until retiring in 2013. Anna was a member of First Evangelical Lutheran Church (WELS), and sang in the choir for 25 years. She also served on the preschool committee, Evangelism and Stewardship committees. Anna enjoyed golfing nine holes at Washington Park Golf course for many years. She also enjoyed playing 18 holes at Johnson Park Golf Course and Meadowbrook Country Club. She also served on the WWPLGA and WWSGA (State golf committees for women’s golf) for over 20 years. There were many times where you’d find her playing bridge in several places in Racine. She especially enjoyed playing duplicate bridge at The Lanes on HWY 20 as well as tournaments in and around the Milwaukee area. She is survived by her mother, Norene Rindfleisch of Jefferson, WI, sister, Sara (Jim) Hilmer, Fayetteville PA. and, niece Jane Neagley, Mechanicsburg, PA. in addition to cousins in Wisconsin and Fairfax, VA. She was preceded in death by her father, Jim Rindfleisch, Jefferson, WI, grandparents Harold and Marie Rindfleisch, Walter and Helen Frentzel and, godfather and uncle, Jack Frentzel. Funeral service will be held at First Evangelical Lutheran Church on 730 Villa St, Racine, WI on Friday, July 3, 2020 at 11 a.m. with Rev. John Roekle officiating. Viewing from 9:30 a.m. until time of the service. Funeral Service will be live streamed via YouTube page on church website: http://firstracine.org In lieu of flowers contributions can be made to her church, First Evangelical Lutheran.

The family of Anna Marie Rindfleisch created this Life Tributes page to make it easy to share your memories.

Send flowers to the Rindfleisch family.