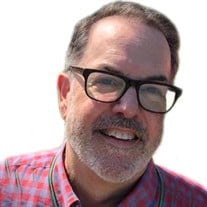 Arthur D. Shattuck RACINE - Arthur D. Shattuck, 67, passed away on Saturday, January 18, 2020 at Azura Memory Care in Kenosha. He was born in Wilmette, IL on June 13, 1952, the son of the late Charles and Elizabeth (nee: Monk) Shattuck. Arthur attended Kent State University. He owned and operated Roots and Legends in Racine, where he was also an Herbologist, a certified acupuncturist, and a practitioner of Eastern Medicine. Arthur was a member of Olympia Brown UU Church. He enjoyed gardening and traveling, especially to China. Surviving are his children, Steven Shattuck, and Sam Shattuck; brothers, Robert and Julie Shattuck, and Dave and Debra Shattuck; nieces and nephews, Brad Shattuck, Lucas Shattuck, Sarah (nee: Shattuck) Bermudez, Beth (nee: Shattuck) Batchelor, and Molly (nee: Shattuck) Gill. He is further survived by his former spouse, Michael Seyller, other relatives and many dear friends. A memorial service for Arthur will be held at Olympia Brown UU Church, 625 College Ave., Racine, WI 53403, on Wednesday, January 29, 2020 at 1:00 p.m. with Rev. Marlene Walker officiating. In lieu of flowers, donations may be made to Alzheimer's Association or a charity of one's choice. Arthur's family would like to thank Home Harbor Assisted Living, and Azura Memory Care of Kenosha for the support and comfort that they provided him.

The family of Arthur D. Shattuck created this Life Tributes page to make it easy to share your memories.

Send flowers to the Shattuck family.