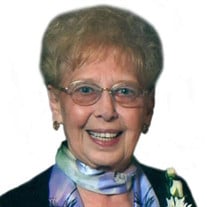 Barbara Mae Feehrer RACINE - Barbara Mae (nee: Blodgett) Feehrer, 82, passed away on Wednesday, October 9, 2019 with her family by her side. She was born in Racine on July 11, 1937, the daughter of Howard and Helen (nee: Ruszczyk) Blodgett. On May 12, 1956, Barbara was united in marriage to Charles Feehrer. She worked as an interior decorator at Mrazek’s Carpets for 15 years, retiring at the age of 57. Barbara was a member of St. Edward’s Catholic Church. She loved being a Mom, Grandma, and Great-Grandma. Barbara also enjoyed volunteering, and was active in the American Red Cross as a disaster relief services worker in Wisconsin, across the U.S. and the U.S. Virgin Islands, and in New York after 9/11. She loved to travel especially on casino trips. Above all, Barbara loved and treasured her family. Holidays were very important to her; the bigger the gathering, the louder, and the more laughter, the better. She is survived by her husband of 63 years, Charles; children, Susan (Daniel) Feehrer-Laack of Racine, Michael Feehrer of Chicago, and Jonathan Feehrer of Marshfield, WI; grandchildren, Alisson (Kevin) Gannaway, Brooke (Benjamin) Tjaden, Alex Vanderheyden, Elizabeth (Vincent) Piraino, Amy Vanderheyden (Daryle Sturino), Kelly Feehrer, and Scott Feehrer; great-grandchildren Charlie Gannaway and Baby Piraino; and her brother, Robert (Helyn) Blodgett. She is further survived by other relatives and friends. Barbara was preceded in death by her parents and her best friend, Barbara Christoff. Funeral services for Barbara will be held at Sturino Funeral Home on Monday October 14, 2019 at 11 a.m. Visitation will take place at the funeral home on Sunday October 13, 2019 from 2 p.m. until 4 p.m. and will continue on Monday from 10 a.m. until service time. She will be laid to rest at West Lawn Memorial Park. In lieu of flowers, those wishing to remember Barbara in a special way may direct memorials to a charity of your choice.

Barbara Mae Feehrer RACINE - Barbara Mae (nee: Blodgett) Feehrer, 82, passed away on Wednesday, October 9, 2019 with her family by her side. She was born in Racine on July 11, 1937, the daughter of Howard and Helen (nee: Ruszczyk) Blodgett.... View Obituary & Service Information

The family of Barbara Mae Feehrer created this Life Tributes page to make it easy to share your memories.

Send flowers to the Feehrer family.