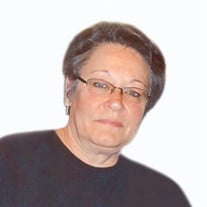 Barbara Ann (nee: Marcantonio) Petersen, age 66, resident of Racine, passed away at her residence on Wednesday, October 7, 2020. She was born on August 5, 1954 in New Kensington, PA to the late John and Caroline (nee: Szul) Marcantonio. Barb attended local schools in Pennsylvania, later attending Gateway Technical College in Racine. She was united in marriage to James Petersen on September 18, 1982 at Grace Lutheran Church in Northbrook, IL. Barbara met James through work at Dillingham in IL and WI. She enjoyed working for TLC at Trinity Lutheran School, later working for Racine Unified. Barbara was employed by St. Catherine's Hospital in Kenosha and Froedtert Hospital in Milwaukee as a medical transcriptionist, and later worked for the Racine Sheriff’s Dept. and the Racine Courthouse-DA’s office. She was a prior member of Trinity Lutheran Church and most previously a member of Prince of Peace Lutheran Church. Barbara enjoyed shopping, going on family trips, attending her grandsons sporting events, and above all else, spending time with her family. Her grandchildren were her greatest joy. She is survived by her loving husband, Jim; daughters, Laura (Jared DeGroot) Petersen, Tara (Carl) Bunch and Sara “Bunny” Petersen; grandchildren, Noah and Carli; sister, Carole (Michael) Nelson; her special friend, Char; and her canine companion, Pal. Barbara is further survived by nieces, nephews, other relatives and friends. She was joyously joined in heaven by James Marcel Petersen & Braiden James Nicholson Moriarity & many other loved ones. Heaven gained an angel, a Polish/Italian one. A memorial will be held at a later date. The family wishes to extend a special thank you to Ascension Hospital Cancer Center, Ascension Hospice, and Barb’s loving friends for all their care and support.

Barbara Ann (nee: Marcantonio) Petersen, age 66, resident of Racine, passed away at her residence on Wednesday, October 7, 2020. She was born on August 5, 1954 in New Kensington, PA to the late John and Caroline (nee: Szul) Marcantonio. Barb... View Obituary & Service Information

The family of Barbara Ann Petersen created this Life Tributes page to make it easy to share your memories.