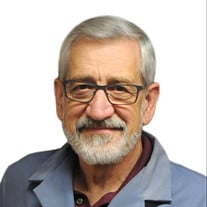 Bernard "Bernie" Wayne Rauwerda, 73, resident of Caledonia, passed away on Friday February 11, 2022 at his residence. Bernie was born on December 30, 1948, to Bernard and Grace (nee: Hart) Rauwerda in Racine. He was united in marriage to Suzanne Wolff on November 28, 1970. He graduated from Racine Horlick High School in 1967, and then joined the US Navy Reserve in 1967. While in the Navy, he served on Midway Island in the South Pacific, followed by service on the USS Hansen Naval Destroyer. He was honorably discharged as Seaman on August 31, 1973. He was employed as a real estate agent for Shorewest Realtors, retiring after many years. Bernie also worked as a Tool and Die Maker with Aide Inc., Sterling Tool, Surgitek and Letsch Manufacturing. He was a member of Living Light Christian Church where he and his wife served as homegroup leaders for seven years. He sang bass in various Christmas concerts hosted by the church. Bernie was a member at the Artist Gallery in downtown Racine where he exhibited his wood-turned art. He enjoyed countless hours in his woodshop as he created segmented wood turned art, furniture, and anything else he could create with wood. In 2007 and 2008, Bernie competed in and finished the Pleasant Prairie Triathlon. He then continued as a serious swimmer at the YMCA. He also coached youth baseball for 12 years for Racine Youth Sports. Bernie enjoyed numerous camping trips to Timber-Lee campground with his family and close friends. He also enjoyed day trips with his wife to various points of interest in Wisconsin, as well as family time with his children and four granddaughters. He is survived by his wife, Suzie of Racine; daughter, Christy (Phillip) Heiman of Janesville; son, Paul (Katie Leffler) Rauwerda; sister, Joanne Reske; granddaughters, Charis, Ryan, Lucy and Thea Rauwerda all of Racine, as well as nephews, other relatives and many dear friends. Bernie was preceded in death by his parents, Bernard and Grace, and brother-in-law, Stan Reske. Funeral services for Bernie will be held at Living Light Christian Church on Wednesday, February 16, 2022, at 11:00 a.m. with visitation from 9:30 a.m. until time of service.

Bernard "Bernie" Wayne Rauwerda, 73, resident of Caledonia, passed away on Friday February 11, 2022 at his residence. Bernie was born on December 30, 1948, to Bernard and Grace (nee: Hart) Rauwerda in Racine. He was united in marriage to Suzanne... View Obituary & Service Information

The family of Bernard "Bernie" Rauwerda created this Life Tributes page to make it easy to share your memories.

Send flowers to the Rauwerda family.