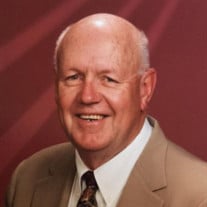 RACINE - Calvin "Cal" Thomas Dykstra, 86, passed away on Sunday, May 24, 2020. He was born in Racine, WI on January 24, 1934, the son of the late Sieberen and Jessie (nee: Friesema) Dykstra. He was a 1953 graduate of Park High School. After graduation, he enlisted in the United States Navy and served for many years, including Korea. Cal had a passion working with large construction equipment and later started his own business, Cal Dykstra Equipment Co., Inc. He specialized in buying and selling Cranes and Draglines. He was a member of numerous Contractor/Builder Associations. All of Cal's contacts and customers were very special to him and he felt extremely proud about every sale he made, nationally and internationally. He refused to retire and worked very hard, every single day until his passing. Cal loved the color orange, and going to rummage/estate sales to find orange colored treasures. It was a lucky day if you were gifted one of his finds. He loved going to Eagle River and spending time on the lakes. He enjoyed growing sunflowers, vegetables and planting flowers/trees. Tulips were his favorite due to his Dutch heritage. Cal traveled often to visit his daughter and grandchildren. He planned fun activities and often brought amazing gifts. Grandpa Cal was their biggest fan. He enjoyed spending time with friends and family at Johnson's Park, golfing and socializing. A memorial planter will be made and placed at JP in Cals honor - in remembrance of all of the colorful flowers he had planted there throughout the years. Cal is survived by his daughter, Dawn Patricia Ireland of Sedona, AZ; two grandchildren, Brooke (Scott) Mustonen of Shoreview, MN, and Brett Yoder of Madison, WI; sisters, Grace and Janice, many special nieces, nephews and lifelong friends. He is preceded in death by his parents and brothers, Raymond and James "Bud", his in-laws, and many best friends. A huge thank you to Nick and Sue Fattah (Caribe Assisted Living), their wonderful staff and residents for all of their extra care, kindness and patience. Thanks to all who visited or called during his last few years. It meant a lot to him. No funeral was held, instead a "Celebration of Life" party is being planned at Johnson's Park, for August 2nd - tentative. Happy Father's Day, Dad/Grandpa. We love you, thanks for the memories. (Frank Sinatra - My Way)

The family of Calvin Thomas Dykstra created this Life Tributes page to make it easy to share your memories.

Send flowers to the Dykstra family.