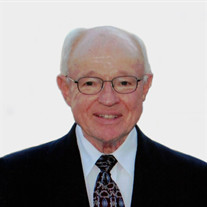 Dr. Calvin J. Verbrugge RACINE - Calvin James Verbrugge, 81, passed away on Sunday, March 10, 2019 with his wife by his side. He was born in Sioux Falls, SD on July 26, 1937, the son of the late John and Marie (nee: Sinkey) Verbrugge. He earned his bachelor's degree from Calvin College and received his PhD from Purdue University. On September 21, 1961, Calvin was united in marriage to Pauline Koene in Chatham, Ontario, Canada. He worked as a research chemist for SC Johnson for 35 years, retiring in July of 1998. Calvin was a member of Racine Christian Reformed Church and was very involved with Racine Christian School. He was also a member of the American Chemistry Society and was a charter member of the Racine Curling Club. He enjoyed traveling with family, especially experiencing the wonders of solar eclipses and the National Parks. Calvin was also an avid fan of the Milwaukee Brewers and the Green Bay Packers. He will be greatly missed by his wife of 57 years, Pauline; children, Helen (Garry) Arkema, and Susan (Chris) Guck; unofficial adopted family, Tim and Carol Bratt; grandchildren, Annemiek (Edgard) Arkema, David Arkema, Laura Guck, Sarah Guck, Karl (Kendra) Bratt, and Nolan Bratt; great granddaughter, Lilliana Bratt; brother, Glenn (Berniece) Verbrugge; sisters, Marlys (Henry) Admiraal, and Ruth (David) Shackelton; sister-in-law, Coby Koene, and brother-in-law, Hank (Donna) Koene. He is further survived by nieces, nephews, other relatives and friends. Calvin was preceded in death by his brother, Verlyn Verbrugge, and brother-in-law, Adrian Koene. Funeral services will be held at Racine Christian Reformed Church on Friday, March 15, 2019 at 11 a.m. with Pastor Anson Veenstra officiating. Visitation will be held at Sturino Funeral Home on Thursday from 5 p.m. until 7 p.m. and on Friday at the church from 10 a.m. until time of service. Calvin will be laid to rest at West Lawn Memorial Park. In lieu of flowers, memorials may be made to Racine Christian School Endowment Fund and Hospice Alliance. The family is thankful for the compassionate care Calvin received from the Home Instead Senior Care aides and Hospice Alliance staff.

Dr. Calvin J. Verbrugge RACINE - Calvin James Verbrugge, 81, passed away on Sunday, March 10, 2019 with his wife by his side. He was born in Sioux Falls, SD on July 26, 1937, the son of the late John and Marie (nee: Sinkey) Verbrugge. He earned... View Obituary & Service Information

The family of Dr. Calvin J. Verbrugge created this Life Tributes page to make it easy to share your memories.

Send flowers to the Verbrugge family.