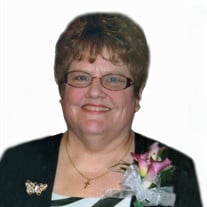 Carol (nee: Barina) Baer, 71, passed away on Wednesday, August 15, 2018 at Ascension All Saints Hospital with her family by her side. She was born in Racine on January 27, 1947, the daughter of the late Frank and Esther Barina. Carol was a 1965 graduate of St. Catherine's High School, and later earned her Master’s Degree in Education from Carthage College. On July 12, 1968, Carol was united in marriage to Ronald Lyle Baer, and they later had a church ceremony on October 28, 1977. Carol was a second grade teacher at Yorkville Elementary School for 43 years, retiring in June of 2010. She was a loving wife, mother and grandmother. Carol was always there for any help needed by her children and grandchildren. She loved visiting the casino and Hawaii. Carol enjoyed reading, camping, swimming, watching TV, and playing games on her Kindle. She was a collector of bears and butterflies. Carol will be missed by her husband, Ronald; children Robbie (Corrine) Baer, Tammy (Tony) Jakovec, and Ryan (Jenny) Baer; grandchildren, Brooke, Brandon, McKayla, McKenzie, Aubreyana, Maverick, and Bri Bear, daughter of Renee and Brian Candido. She is also survived by her sister Diane (Dan) Makutz, and her brother Robert (Susan) Barina. Carol is further survived by nieces, nephews, other relatives and many dear friends. Funeral services for Carol will be held at Sturino Funeral Home on Thursday, August 23, 2018 at 11 a.m. Visitation will be held at the funeral home on Wednesday evening from 5 p.m. to 7 p.m. and on Thursday from 10 a.m. until the time of service. Carol will be laid to rest at West Lawn Memorial Park. Carol's family would like to thank Ascension Cancer Center, especially Dr. Hassan and his wonderful team and the 3rd Floor Cardiovascular ICU staff for their exceptional and loving care in her time of need.

Carol (nee: Barina) Baer, 71, passed away on Wednesday, August 15, 2018 at Ascension All Saints Hospital with her family by her side. She was born in Racine on January 27, 1947, the daughter of the late Frank and Esther Barina. Carol was a... View Obituary & Service Information

The family of Carol Baer created this Life Tributes page to make it easy to share your memories.

Send flowers to the Baer family.