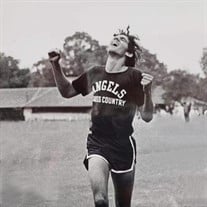 Charles R. LeRose, "Chuck," State of WI Cross Country Champion two-mile record holder, ran his toughest and final race this past year, crossing the finish line at home March 9, 2021, surrounded by love, laughter, music, and his emotional support dog, Neroli. He was grateful, and humbled by how his St. Catherine's Class of 1972 classmates, coaches and teammates rallied around him this past year. Chuck left behind his biggest cheerleader, and love of his life, Christina (Hufen) LeRose, and an entire cheering section that includes his three boys; Stephan (Kim) LeRose, Aaron (Heather) LeRose, Anthony LeRose, and four grandkids who knew him as Gampers and Grandpa Shark; Brooke, Jaxson, Jordan, and Micaila. Chuck’s mom, Dr. Barbara (Cain) LeRose, and five siblings; brothers John J LeRose Jr., Paul (Deanna), James (Sue) LeRose, sister Grace LeRose, and his baby sister and bookend, Catherine (Vince) LeRose, plus Mother-in-Love, Sigrid Hufen, Brother/sister-in-Love Mark and Laura (Hancock) Hufen, and the Fab 5 (Nikolas, Rebekah, Alekzander, Sebastian, and Christoff Hufen), and slews of adoring extended family members, and friends. So many friends and family literally carried and loved him and his family through the past year, walking beside them as their "Dr. Boogie" made the courageous decision to live every single day to its fullest, something that doesn't happen without an army of love warriors. Chuck was preceded in death by his father, John J LeRose, and his Father-in-Love, Manfred Hufen. Through no choice of his own, the "Legend," retired with an award of excellence from Kenosha Human Development Services in 2020, where he truly walked in his purpose as a social worker, serving people affected by chronic mental illness. Chuck took great joy in mentoring young staff new to service, as well as teaching them to win at cribbage, shave at work, and raid the refrigerator from time to time. He was recently told that his clients still ask for him. His family is eternally grateful for the outpouring of love, and support he received this past year from the many friends he made during his time there. Chuck was very active in the recovery community, and was filled with gratitude to God for giving him the serenity, courage, and wisdom to take one day at a time for his last eight years. Charlie, as he was known by some, hand-selected an incredible team of angels, who believe as he did: that terminally ill people deserve to die well. He was very specific about recognizing them with special thanks from his heart: Froedtert Medical College Palliative Care, Catherine Van Schyndle ANP, the Horizon Home Hospice team led by Krista Davis, RN, and his Death Doula, Shantell Riley RN, of Dignity With Departure. Last but not least, his dear friend of many years, and now heavenly angel, Fritzie Sawasky who offered him so much support to him throughout his end-of-life journey. In addition to befriending everyone he ever met, Chuck’s interests were vast. He loved music, and, because of his eclectic taste, was known as “Dr. Boogie", and "BB" (he loved the blues). Playing a game of cribbage while jamming his favorite tunes was the "Crib Master’s" ultimate night in. "Old One Match," a name that stuck with him from his Eagle Scout days, built the most epic fires, and he found great peace in nature. He taught many friends how to start fires without using sissy juice. Chuck was passionate about supporting local small, women, and black owned business, and non-profit organizations. He was most excited about spending time with his grandkids every chance he could. The community of friends he gathered through the years will have an opportunity to celebrate his life around a rip-roaring fire, on June 12th, more information to follow. In lieu of flowers, memorial gifts to the family are greatly appreciated.

The family of Charles "Chuck" LeRose created this Life Tributes page to make it easy to share your memories.

Send flowers to the LeRose family.