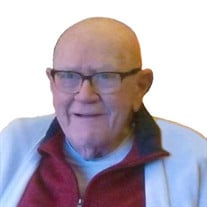 Charles W. “Chuck” Rattle, 91, resident of Mt. Pleasant passed away at Seasons Hospice in Oak Creek on September 27, 2020. All that Chuck wanted was to be with his honey. On September 27th that wish was granted when he went home to the arms of his wife Faye who proceeded him in death on October 2nd 2015. Dad was born in Racine on November 25th 1928 the son of Arthur and Lulu Rattle. He had one brother Art (Jane) Rattle who both proceeded him in death. On September 11th 1948 he married the love of his life Faye Marie Manley. The support and love and commitment to each other was evident every day of their lives together. His strong work ethic showed by working part time at Central Saw while also working full time at Western Publishing where after over 30 years of service he retired in 1992. Dad’s greatest and most fulfilling job though was being a husband to Faye and a father to his four children. He was known to play a mean game of cribbage and his favorite card game was sheepshead where he played in a weekly card club at church. His favorite pastime in his later years was putting together jigsaw puzzles where he spent hours a day working on them. Dad was a man of strength, integrity and high family values and also an avid sports fan. Especially the Chicago Cubs and Bears. He was a constant in his children’s lives by coaching sports to attending sports events and competitions. That continued with him being a familiar face on the sidelines of his grandchildren’s and even great- grandchildren’s games. Family was the center of his life and he so looked forward to family gatherings and especially the holidays when everyone was together. These values were passed down to his children David (Pat) Rattle, Kevin (Linda) Rattle, Linda (Andy) Vacca and John (Nina) Rattle. Dad’s family legacy continues through his 10 grandchildren: Michael (Marie), Jeremy (Cat), Jared and Chrissy Rattle. Sarah (Cheyenne) Skenandore, Kevin (Amy) and Liz Rattle. Marie, Emily and Joey (Cora) Rattle and 13 great grandchildren. Dad also leaves behind his loving brother/sister-in-law David (Maggie) Manley and sister-in-law Marti Manley along with other relatives and friends to celebrate his life. Public visitation will be held at Sturino Funeral Home Funeral on Friday October 2, 2020 from 9:30 a.m. until 10:45 with a private family service to follow at 11 a.m. with Chaplain Bernice Towns officiating. Burial at West Lawn Memorial Park to follow. In lieu of flowers, those wishing to remember Dad in a special way may direct memorials to Lutheran Church of the Redeemer. The Rattle Family would like to extend a very heart felt thank you to the staff at Seasons Hospice and Palliative Care in Oak Creek for their loving and devoted care. You are all angels! Online condolences to www.sturinofuneralhome.com STURINO FUNERAL HOME 3014 Northwestern Ave. 262-632-4479

Charles W. &#8220;Chuck&#8221; Rattle, 91, resident of Mt. Pleasant passed away at Seasons Hospice in Oak Creek on September 27, 2020. All that Chuck wanted was to be with his honey. On September 27th that wish was granted when he went home... View Obituary & Service Information

The family of Charles "Chuck" Rattle created this Life Tributes page to make it easy to share your memories.

Send flowers to the Rattle family.