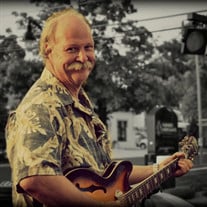 December 18, 1952 – August 29, 2020 RACINE, WI – Christopher Jerel “Jumbo” Inloes, 67, of Racine, WI passed away peacefully on August 29, 2020. Christopher was born in Ann Arbor, MI to Edith F. (Bell) and James C. Inloes on December 18, 1952. Chris graduated from J.I. Case High School in 1971 and worked as a freelance graphic designer for over 35 years. His graphic design work can be notably found through many logos, posters, menus and other pieces of art around the Racine, Kenosha, and Southeastern Wisconsin areas. More notably, Chris, or as some would call him “Jumbo”, was known for being a pillar in the Racine music scene. Starting at Mitchell Junior High School, he played in bands with friends, originally on bass but later would switch to guitar to accompany his voice. While at Case, he was a member of The Lines End, where they recorded a 45 with his original song “Miss Illusion” as the B-side. He went on to play in the trio Tony, Jumbo and Gary at Parkside and later Tony, Jumbo, and the Root River Band which made a revival in the early 2000s with his son, Michael, on drums. Chris played in the house band, Softouch, at The Holiday Inn for many years and participated in choirs and music at Christ Church of Racine, WI and Franksville United Methodist Church. Most recently, Chris was a leading member of The Sentinels, finishing his last public show in September of 2019. Known for his love of The Beatles and all music from the 60s and 70s, Chris will be remembered for his stellar harmonies, and love of all things musical. His renditions of Neil Young songs at The Stable, were a frequent memory of old friends and acquaintances. Chris will be remembered as a great friend and a gentle soul as well as an amazing father to his two children, Michael and Elizabeth. He is survived by his two children, Michael and Elizabeth Inloes, his siblings Brenda, Brian (Angela), and David (Cort), and his nieces and nephew Emma (Tyler) DeBehnke, John, and Mary. He is proceeded in death by his parents, James C. and Edith F. (Bell) Inloes. The family would like to thank the Williams Bay Care Center and the team of doctors at Mercyhealth -Janesville, for their extensive care. Memorial services will be arranged and held at a later date. In lieu of flowers, memorial donations can be made to the Milwaukee Symphony Orchestra.

The family of Christopher "Jumbo" Inloes created this Life Tributes page to make it easy to share your memories.

Send flowers to the Inloes family.