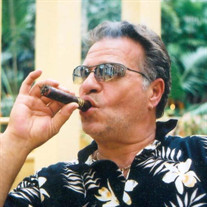 Dale E. Commodore Mount Pleasant – Dale Edward Commodore, 71, died at his home on Friday, October 22, 2021. He was born in Racine to the late Norman Commodore and Darlene (nee: Osborne) Commodore on September 19, 1950. Dale was a veteran of the United States Army. He shared his dad’s love of cooking, motorcycles, sailboats & Packer Sunday! Always ready for an adventure. He was a free spirit and would go wherever the wind took him. We will remember him for singing Sinatra, cooking & telling great stories. He is survived by his loving and devoted mother Darlene, his ex-wife Debbie who in these last months has been an angel taking care of him night and day, Children: Tony (Trisha), Rachel (Joey), Dominick (Asheton). Grandchildren: Dylan (Macy), Angelica (Nick), Isabella, Tony, Tera, Leonardo, Tate, Teagan, Dominick & Elessia. Also, brothers-in-law Frank Cihler & Rick Orta. Nieces: Michelle (Michael), Angela & their children. Many cousins, other relatives and friends. He was proceeded in death by his father Norman and his best friend and little sister Linda. Dale has requested to be cremated with no service. His Celebration of Life Party will be held at the Roma Lodge on Friday November 12, 2021 at noon for immediate family. He will have his ashes laid to rest in the spring in his own memorial garden with his favorite guard dog Guinness’s ashes at his daughter Rachel’s house in the Northwoods. Instead of flowers if you would like to give a tree or perennial for his garden, we would appreciate it. Thank you to everyone who has helped us through this difficult time especially Debbie, Shelly & Mike.

Dale E. Commodore Mount Pleasant &#8211; Dale Edward Commodore, 71, died at his home on Friday, October 22, 2021. He was born in Racine to the late Norman Commodore and Darlene (nee: Osborne) Commodore on September 19, 1950. Dale was a veteran... View Obituary & Service Information

The family of Dale Edward Commodore created this Life Tributes page to make it easy to share your memories.

Send flowers to the Commodore family.