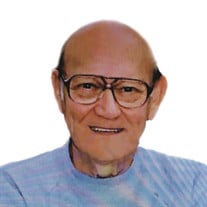 Dale W. Laursen RACINE – Dale Warner Laursen, 92, went to join his Good Buddy, revered Heavenly Father on Thursday, July 30, 2020 at Elder Care Cottages in Waterford. He was born in Waukegan, IL, on March 1, 1928, the son of the late Thorvald and Esther (nee: Harthun) Laursen. Dale was a proud graduate of Wm. Horlick High School. On June 13, 1945, Dale was united in marriage to his beloved Gayle Peterson in Crown Point, IN. Dale worked for 46 years at Western Publishing (missing only one day in all those years), many of those as a Binder, also filling in for any absentee worker on any machine. He spent his final 15 years at Western as head of the Sample Room, retiring in 1990. He was a member of the Golden Book Retirement Club, and Our Savior's Lutheran Church, where he taught Sunday School, and ushered. Dale enjoyed fishing “up North” in Pickerel and the surrounding inland lakes. He liked bowling, soft ball, tennis, golf, and playing cards, at which he usually won. He loved dancing, including square dancing and ballroom dancing. Dale used the basketball hoop over his garage to engage many of his male progeny, who cherish those memories, noting that he somehow got better and better as the kids themselves improved. He dearly loved animals of all kinds, and doted on several pet dogs throughout his life, and one cat, Snowball. Dale endeared himself to many with his keen sense of humor, which endured throughout his life. He coined silly nicknames for family members closest to him, e.g., Kitty Kat, Fritzie, Wender-Bender, Kayla-Balayla, and Denie-Beanie. Everyone who knew Dale enjoyed his easy manner and love of life. Dale will be greatly missed by his children, James (Patricia) Laursen of Caledonia and Texas, Jacquelyn Laursen of Racine, Kathryn (Brian) Paine of Grants Pass, OR, and Wendy Davis of Round Rock, TX; ten grandchildren, sixteen great-grandchildren, and six great-great-grandchildren. He is further survived by many nieces, nephews, cousins, other relatives and friends. Dale was preceded in death by his adored wife, Gayle, infant brother, Vernon, and his sister, Joyce. The family wishes to extend great appreciation and thanks to the staff and personnel at Elder Care Cottages for the excellent care, compassion, and comfort they provided Dale. Thanks also go to St. Croix Hospice for their quick response and thorough, gentle support. A Celebration of Dale's life will be held at the Racine Zoo, Meercat Manor on October 3, 2020 from 12:00 noon to 2:00 pm.

The family of Dale W. Laursen created this Life Tributes page to make it easy to share your memories.

Send flowers to the Laursen family.