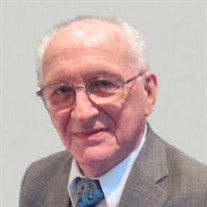 David Carl Bidstrup (age 87) was taken into God’s arms on Monday, February 4, 2019 from Ascension All Saints Hospital. David’s life was one of gifts received and gifts shared. David was born March 21, 1931 to Emil and Clara Bidstrup in Racine, WI. He grew up with his older sister Marcella (Nielsen). David graduated from Park High School in 1950. After a brief employment at SC Johnson, David served his country as a member of the Marine Corps. Following his discharge he returned to school, attending Dana College in Blair, NE. While serving as a photographer for the school, he had the good fortune of being asked to photograph incoming freshman students. One of them was Betty Christensen from Green Bay. She learned that David was also from Wisconsin and arranged a ride back with him at the end of the term. This was the beginning of a life long journey together. They were married August 10, 1957. David graduated in 1958 and they remained in Blair as he was employed by the college. Their first child, Kären, was born while they were living in Blair. They moved to Racine in 1961 after David took a job with the Racine School District. David became the Director of Buildings and Grounds shortly thereafter (a position he held until his retirement in 1989). Their family then grew with the additions of Karla and Kai. The family was active in the Lutheran Church of the Resurrection. David served as a trustee and frequent volunteer. He was also a member of Kiwanis. One of the many gifts David was grateful for was the kidney he received from his daughter Kären in 2000. It gave him renewed health and 18 more years to enjoy his family. His hobbies produced heirloom items that are owned by many, and are used weekly by his church family. His woodworking skills produced both beautiful furniture and artfully turned pieces. His braided rugs softened hard floors for many feet. His 700+ quilt tops were turned into complete quilts by the women of the church, and have been distributed worldwide through Lutheran World Relief. But the greatest gift he shared was his quiet, gentle approach to marriage and parenting. He will be dearly missed by his family: wife Betty, children Kären Gueldenzopf (Robert), Karla Bidstrup, Kai Bidstrup (Susan), grandchildren Carly Griffis (Nic), Evan Spencer, Elizabeth Bidstrup, Margaret Bidstrup, and great grandchildren Audrey Davis, Andrew Davis, Rose Griffis and Luke Griffis. David was looking forward to the glories of heaven, including seeing his grandson Aaron Davis (Ana) who preceded him in death. He greatly enjoyed both the love he was shown by his many nieces and nephews and the time he spent with friends. A celebration of David's life will be held at 2:00 pm on Saturday, February 9 at the Lutheran Church of the Resurrection, 322 Ohio Street, Racine, Wi 53405. Visitation will be held from Noon - 2:00pm preceding the funeral. In lieu of flowers, memorials may be given to the Lutheran Church of the Resurrection, for facility maintenance.

David Carl Bidstrup (age 87) was taken into God&#8217;s arms on Monday, February 4, 2019 from Ascension All Saints Hospital. David&#8217;s life was one of gifts received and gifts shared. David was born March 21, 1931 to Emil and Clara Bidstrup... View Obituary & Service Information

The family of David Carl Bidstrup created this Life Tributes page to make it easy to share your memories.

Send flowers to the Bidstrup family.