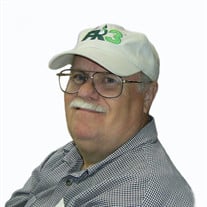 Donald S. Olsen RACINE-Donald Scott Fabricius Olsen, 72, passed away at Ascension All Saints Hospital’s ICU on January 1, 2021, from complications of COVID. Don was born in Racine, on January 4th, 1948, the son of the late Donald and Remore (nee: Nielsen) Olsen. After graduating from Washington Park High School in 1966, he continued his education by studying mechanical technology at the Racine Technical Institute. Don had various places of employment which included Goldblatt’s, Hahn Hydraulics, Circuit City, and lastly Cooper Power Systems, where he was a lab technician retiring after 27 years of service. On September 8, 1973 he was united in marriage to the former Jenny Richards. They were married for 37 years and had three children together. Don found great enjoyment in building computers, printing out many items on his 3D printers to share with others, cooking in his beloved air fryer, hanging out with his son’s cat Molly, cheering for the Brewers and Packers, and having Sunday dinners with his kids and grand-doggies. He tremendously loved his daughter’s dogs- Roxy and Fiona, and always spoiled them with treats, leftovers, and presents. Don enjoyed spending time with his life-long friends, brothers John and Tom Krenzke. For more years than anyone can probably count, they went out for a very early morning breakfast most Saturdays. They were usually waited on by his niece, Kelly Bohlman (nee: Kleimola) Almost yearly since 1973, they went several times a season up North to the Pike Lake area where they enjoyed camping, hiking, boating, and fishing. Don is survived by his children, Cheryl (Jeff) Peterson, Christopher Olsen, and Chad Olsen, all of Racine. He is further survived by six siblings, Janet (Gary) Smith, his twin brother, Warren Mark Fabricius (Karen) Olsen, Cindy Lieungh, Carrie (Dave) Zuehlke, Julie (Mike) Masik, and Joanne (Rick) King. He is also survived by his former spouse, Jenny Olsen, and many other nieces, nephews, relatives, and friends. Don was preceded in death by his other buddy, and brother-in-law, Allan Kleimola. They spent many a morning having coffee together, then taking their motor scooters out to run errands and getting lunch. There will be a private celebration of life memorial at a date later TBD, when times are safe for family to reunite without COVID fears. In lieu of flowers, donations to the American Diabetes Foundation, or the Racine Humane Society would be appreciated. Whether you knew him by Dad, Donald, Don, Scott, Donnie, Skipper, Zip, or “Hey Olsen”, his ending words to you were usually, “Talk to you later”. And we will, you can plan on it.

Donald S. Olsen RACINE-Donald Scott Fabricius Olsen, 72, passed away at Ascension All Saints Hospital&#8217;s ICU on January 1, 2021, from complications of COVID. Don was born in Racine, on January 4th, 1948, the son of the late Donald and Remore... View Obituary & Service Information

The family of Donald Scott Fabricius Olsen created this Life Tributes page to make it easy to share your memories.

Send flowers to the Olsen family.