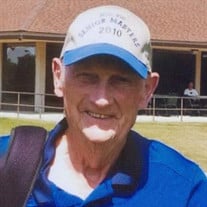 Donald H. Petersen RACINE - Donald Henry Petersen, 91 passed away at Ascension-All Saints Hospital on Saturday, April 18, 2020. Don was a lifelong resident of Racine, born on September 3, 1928, the son of the late Henry and Marian (nee: Anderson) Petersen. He was a graduate of Wm. Horlick High School, class of 1946. On October 7, 1950 he was united in marriage to Grace Lorraine Mathieus at Bethal Methodist Church. Don proudly served in the National Guard, 32 Red Arrow Division for five years. He had been a machinist at Twin Disc for 23 years, retiring in 1993. Previously he had been employed with Hamilton Beach for 22 years. Don and Grace had bowled on couples leagues for many years and together they had a love of travel. They shared many annual trips to Las Vegas and in later years at nearby casinos. They also had many trips to different Caribbean Islands and had taken two trips to Hawaii. One of their most memorable trips was when they took their then young sons, on a cross country vacation for a month, touring many of the national parks. During Don's younger years he played semi pro baseball from 1948 to 1958. He very much enjoyed being involved with his sons activities when they were young. Don helped establish the Trail blazers, where dads and sons went camping, did crafts projects and went sledding and tobogganing. He also coached Little League with the Caledonia Lions Club. Don loved golfing and hunting as well. Surviving is his wife, Grace and their sons, Thomas S. Petersen and Daniel S. Petersen, both of Mt. Pleasant; grandchildren, Ashley Petersen and Joshua Petersen and great grandson, Levi; sisters, Eleanor Thill, Kathy (Frank) Cetrano and sister-in-law Sally Mathieus; brothers, Robert Petersen and Richard Petersen. He is further survived by many other relatives and friends. Don was preceded in death by brothers-in-law, Richard Mathieus and David Mathieus; sisters-in-law, Grace Petersen and Barbara Petersen; sister-in-law and brother in-law, Doris (Glen) Sorensen. Private services have been held. Don has been laid to rest at West Lawn Memorial Park. A memorial service will be held at a later date. A very special thank you to the Ascension-All Saints Hospital staff for their loving care.

The family of Donald H. Petersen created this Life Tributes page to make it easy to share your memories.