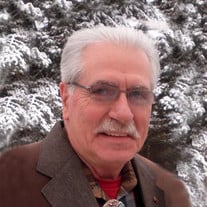 RACINE - Donald C. Squires, 76, went to be with his Lord on January 25, 2019. He was born to Clayton and Ruth (nee: Halberstadt) Squires on April 9, 1942 in Racine. While he grew up in Racine, he spent part of his earlier life in the St. Germain area of Wisconsin, starting school at St. Germain Grade School in 1948. His family moved to Racine in 1950. He graduated from Racine Lutheran High School in 1960. Don worked at Modine Manufacturing until 1963, then he started at Johnson Wax. Don married Virginia (Lani) Wigman on February 29, 1964 at Holy Cross Lutheran Church. They have two fantastic sons, Jon (Lora) and Daniel (Karen) Squires, and two wonderful grandchildren, Clayton and Sierra. Don worked at Johnson Wax for almost 26 years, reaching the position of Associate Project Manager in the Facilities Management Department. He was in charge of moving two homes from the Racine campus to adjoining properties, adding squash and racquetball courts to the JMBA Center, and building the Aquatic center at Armstrong Park. He also worked on several of the Johnson Outdoors facilities around the country. He was appointed to a three year term as a Trustee on the Johnson Wax Fund in 1973, and received the H.F. Johnson Community Service Award in 1982. Don left Johnson Wax in April of 1989 to work on his own as a Construction Consultant, working on the Case, Inc. headquarters, and later at Johnson Wax on several projects. In June of 1992, he started at Bane-Nelson, Inc. as a Project Manager, opening the Racine office. In March of 1995, he was transferred to the Kikkoman Foods plant in Walworth County as Director of Operations, where he was in charge of construction operations until his retirement in 2006. Don was involved in the Boy Scouts in Racine for 50 years. He served as Council Commissioner for nine years, vice-president and Board member for 23 years. Don served as Ass't Scoutmaster, Club Master, Committee Chairman, and various District positions and District Chairman. He received the Silver Lamb Award from the Lutheran Church in October, 1983, and the Silver Beaver Award from the Southeast Wisconsin Council in November of 1984. He was a Brotherhood member of the Order-of-the-Arrow Lodge. Don ran two Wood Badge Training Courses in 1985 and 1991, with 100% completion in both. Don leaves behind his wife of nearly 55 years, Lani, beloved sons, their spouses, and grandchildren. He will also be missed by his much loved pet, McGee. Don is further survived by nieces, nephews, other relatives and numerous cousins around the country. He will be profoundly missed by his entire family. Memorial services will be held at Sturino Funeral Home Friday, February 1, 2019 at 6 p.m. There will be a visitation at the funeral home from 4 p.m. until time of service. A special thank you goes to his caregivers at the Woods of Caledonia, namely Patty, Nicole, Amy, and Lisa. Also, Allay Hospice for their kindness and support. In lieu of flowers, memorials to the Parkinson’s Association have been suggested.

RACINE - Donald C. Squires, 76, went to be with his Lord on January 25, 2019. He was born to Clayton and Ruth (nee: Halberstadt) Squires on April 9, 1942 in Racine. While he grew up in Racine, he spent part of his earlier life in the St. Germain... View Obituary & Service Information

The family of Donald C. Squires created this Life Tributes page to make it easy to share your memories.

Send flowers to the Squires family.