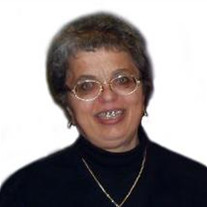 Doreen E. Schneider INDIANAPOLIS - Doreen Emma (nee: Sturino) Schneider, 63, formerly of Kenosha, passed away peacefully on Monday January 6, 2020, with her loving and devoted family by her bedside in the comfort of her own home. She battled breast cancer courageously and head-on with determination and a never-ending faith in new and better tomorrows, while knowing her loved ones were waiting to welcome her home. Doreen was born in Kenosha, WI on July 25, 1956, the only and “favorite daughter” of George and Gloria (nee: Neudorff) Sturino. She was a graduate of Mary D. Bradford High School “Class of 1974”. Doreen was employed at her family's restaurant, Sturino’s Italian Restaurant, as head waitress for many years. She met the love of her life James L. Schneider and they married on December 11, 1976. Even with her compromised health, Jim and Doreen recently celebrated 43 years of marriage. They were blessed with two wonderful children, James D. Schneider and his wife, Rachel, and daughter Janet Mae Schneider all of Beech Grove, Indiana. She cherished and adored her five grandchildren, Morgan, MaKenna, James “Bubba”, Jocelynne, and Faith. Doreen is further survived by her mother, Gloria Sturino of Kenosha; brothers, Dino (Christine) Sturino, David (Vicki) Sturino, Darryl (Jeana) Sturino and Duane (Gina) Sturino. Doreen is also survived by many nieces, nephews, cousins, other relatives and dear friends in Kenosha, and Indiana. She was preceded in death by her father George on February 5, 1997, and nephew, U. S. Army Specialist Paul J. Sturino on September 22, 2003 “Operation Iraqi Freedom”. Even though Doreen was only four feet, four inches tall in stature, she was eight feet tall in love, attitude and commitment to all of those she met and cared for. Visitation will be on Thursday January 9, 2020, from 4 p.m. until 7 p.m. at Sturino Funeral Home, Racine. Funeral services will be conducted at the funeral home on Friday at 11 a.m. with visitation beginning at 10 a.m. She will be laid to rest at St. George Cemetery, Kenosha in private ceremony. In lieu of flowers, those wishing to remember Doreen in a special way may direct memorials to American Cancer Society c/o Breast Cancer, N19 W24350 Riverwood Dr. Waukesha, WI, 53188. Doreen will always be remembered for her daily question, “Jim, where is my purse and where is my phone?”

Doreen E. Schneider INDIANAPOLIS - Doreen Emma (nee: Sturino) Schneider, 63, formerly of Kenosha, passed away peacefully on Monday January 6, 2020, with her loving and devoted family by her bedside in the comfort of her own home. She battled... View Obituary & Service Information

The family of Doreen Emma (nee: Sturino) Schneider created this Life Tributes page to make it easy to share your memories.

Send flowers to the Schneider family.