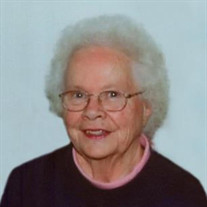 Doris Adell Madsen-RACINE- peacefully transitioned into the arms of Christ, her Lord and Savior on March 15, 2020, at Magnolia Hill Care Center (formerly Bay Harbor) in Mt. Pleasant. Doris was born in Racine on October 8, 1925 to Oscar and Helen Paulson (née: Malmquist). On July 20, 1946, Doris was united in marriage to Norman William Madsen, which lasted 65 years. They raised three sons, Gary Norman (Carolyn) Madsen of Dacula, Georgia, Scott David Madsen of Racine, and Dale Victor (Joan) Madsen of Mt. Pleasant. Doris had eight grandchildren, Kevin Madsen, Brian Madsen Sarah Kasdorf, Peter Madsen, David Madsen, Mary Crockatt, Amber Madsen, Dana Madsen and eight great grandchildren. Doris is further survived but by nieces, nephews, and dear friends. Doris is preceded in death by her beloved husband, Norman, her three dear sisters, Marion Pricher, Evelyn Madsen and Joanne Broberg. Doris enjoyed staying at home raising her family and was also an active member of Grace Church, couples Bible Study, and later the Senior Bible Study. In Doris and Norman's retirement years they wintered in Florida for 22 years where they played golf, bridge, walked and spent time with friends. They also engaged in worldwide travel including China, Middle East, Scandinavia, Italy, and Greece among other countries. Doris' main goals in life were to serve her Lord and her family. By her words and example her children, earned how to give to others. Thank you, Mother. The family would like to extend its sincerest thanks and appreciation to the Caregivers Love and expertise as they cared for Mother. Those wishing to remember Doris in a special way may direct memorials to Youth for Christ of S.E. WI., P. o. box 981041, Racine 53408 or Grace Church, 3626 Hwy 31, Racine, WI. In light of (COVID 19), a public celebration of Doris's life will be announced at a later date. Thank you for understanding.

Doris Adell Madsen-RACINE- peacefully transitioned into the arms of Christ, her Lord and Savior on March 15, 2020, at Magnolia Hill Care Center (formerly Bay Harbor) in Mt. Pleasant. Doris was born in Racine on October 8, 1925 to Oscar and Helen... View Obituary & Service Information

The family of Doris Adell Madsen created this Life Tributes page to make it easy to share your memories.

Send flowers to the Madsen family.