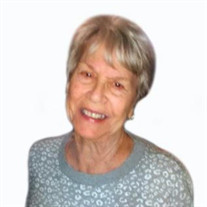 Doris (nee: Bishop) Maurer Reigel, 89, passed away peacefully at her residence on January 9, 2021. She was born on April, 22, 1931 in Monmouth, Illinois to the late William and Mary (nee: Pearson) Bishop. On March 22, 1951 Doris was united in marriage to Larry Maurer. Together they owned and operated The Airport Inn in Sturtevant, then, The Flamingo Dinner Club in Kenosha. Later in her life she married Eugene Reigel in New Orleans. LA. Eugene was the General Manager for Meadowbrook Country Club in Racine, Oak Hills Country Club in San Antonio and others in between. They both had a passion for travel and had many opportunities around the country with The Club Manager’s Association of America. Doris will be missed by her children, Pam (Tom) Olson, Patti Stafford, Terri (Don) Urick, Jeff Maurer; step-children, Cheryl Reigel-Benitez, Gloriette (Nicholas) Winnike, Holly Reigel-Ybarra, Rochelle (Donald) Williams, Timothy Reigel, Dean (Judith) Reigel and Gary Reigel. She is further survived by many grandchildren, great grandchildren, nieces, nephews, other relatives and friends. She is preceded in death by her husband, Eugene, former husband, Larry, step daughter, Debra Reigel, five brothers and three sisters. A private family service has taken place at West Lawn Memorial Park.

The family of Doris Maurer Reigel created this Life Tributes page to make it easy to share your memories.