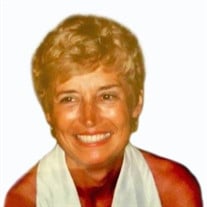 Emily Judith "Judy" Hanson August 11, 1940 - April 9, 2021 WOODLAND HILLS, California - Emily Judith "Judy" Hanson, 80, long time resident of Racine, Wisconsin died at 9:00 p.m. on April 9, 2021 at her residence in Woodland Hills, California. She was born on August 11, 1940 in Chicago, Illinois to Joseph and Mae Soper, both of whom preceded her death. She married Alan Stuart Hanson on October 10, 1964. Alan preceded her death. Judy is survived by her sister and brother in law: Shirley and Robert (Bob) Prigge of Elgin, Illinois; her brother, Joseph (Joe) Soper of Huntley; her brother and sister in law: Bill Hanson and Janice Henry; her sister in law, Sharon Hanson; her son and daughter in law: Greg Hanson and Peggy Hanson; her daughter, Kristin Hanson; her daughter and son in law: Kim and Bill Essling; her six grandchildren: Jack, Ben and Beau Hanson and Brook, Amber and Ashton Essling; several nieces; nephews; cousins and finally four wonderful grandpets: Rica, Dylan, Bodhi and Emma. Judy spent much of her youth in Westboro, Wisconsin before making her way to Madison where she expanded her horizons, becoming a flight attendant for Continental Airlines and meeting her future spouse. She very much appreciated the people and International nature of her position working at J. I. Case as an Administrative Assistant. She loved travel and was always involved with kids and volunteer work. She ran a children's nursery when living in New York, constantly hounded the Racine Journal Times to publish her kid's accomplishments and found full happiness in grandkids, thoroughly embracing her role as "Gramma". She volunteered for several organizations, finding significant purpose at the Animal League of Green Valley as well as knitting innumerable hats, scarves, etc. for local charities. Services will be held at Sturino Funeral Home, 3014 Northwestern Avenue, on June 27, 2021. Visitation hours are from 11 a.m. until service time at 12 noon. Memorial contributions can be made to: American Parkinson Disease Association (apdaparkinson.org)The Animal League of Green Valley (donate.talgv.org)

The family of E. Judy Hanson created this Life Tributes page to make it easy to share your memories.

Send flowers to the Hanson family.