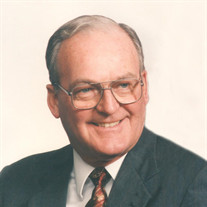 Edward 'Bucky' Hanson Lake Bluff, IL - Edward (Bucky) Hanson, 88, formerly of Racine, passed away at Lake Forest Hospital in Lake Forest, IL on Monday April 8, 2019. Bucky was born on July 21, 1930 in Racine to Steven and Katherine (Jensen) Hanson. He was united in marriage to Nancy (Sorenson) Hanson at the home of her parents (Harry and Emma Sorenson) on July 22, 1950. Bucky was a 1948 graduate of Washington Park High School. He remained a member of Holy Communion Lutheran Church even after having moved to Minnesota with Nancy beginning in May of 2013 and living outside of Racine until his passing. Bucky served the Racine community as a Funeral Director and owner of the Hanson Funeral Home for over 45 years. He began working in the family business with his father Steve Hanson in 1950 and retired as owner in 1995. He was member of the Racine Rotary Club and a Paul Harris Fellow. He and Nancy enjoyed their summer homes, first, on Bohner’s Lake in Burlington, WI and later in Three Lakes, WI on Big Stone Lake following his retirement. They travelled extensively in Germany, Italy, and to many islands in the Caribbean. The summer homes along with the hobbies and interests Bucky had were simply vehicles to strengthen and celebrate the relationships with family and friends that were the central focus of Bucky’s life. He not only loved to share stories but was instrumental in creating them for his five (5) “boys”, their families, and the extraordinary group of lifelong friends that were so important to he and Nancy. He continued to touch the lives of others with his humor, his willingness to help, and his genuine interest in the well-being of the many wonderful people he met in Ft. Lauderdale, FL, Lakeville, MN; Eden Prairie, MN, Edina, MN, and since June of 2018, in Lake Bluff, IL. He is survived by his sons Dr. David and Shari Hanson of Libertyville, IL; Rev. Dana and Nancy Hanson of Winnetka, CA; Jon Hanson of Milwaukee; and Andrew and Peggy Hanson of Minnetonka, MN; his grandchildren (and spouses) Robert and Kristen Hanson, Laura Hanson and Greg Larson, Kristina and Sean Herman, Elizabeth and Nate McIntosh, Gregory and Becca Hanson, David Hanson, Avi and Sarah Hanson, and Emma Hanson; Great-Grandchildren, Kaylee Herman, Elise Herman, and three future great-grandchildren due within the next three months. Also surviving Bucky are his sister Jackie Dodson of LaGrange, IL and his brother Rev. William (Billy) Hanson of Florida. Bucky was preceded in death by the love of his life for 64 years of marriage, wife Nancy in June of 2015 and their cherished son Steve Hanson in December of 2016. Funeral services will be held at Holy Communion Lutheran Church 2000 W. 6th St. on Monday April 15, 2019 at 11 a.m. with Rev. Dana Hanson officiating. There will be a visitation at the Sturino Funeral Home on Sunday, April 14, 2019 from 2 p.m. until 5 p.m. and at the church on Monday from 10 a.m. until time of service. Memorials to the American Cancer Society, Special Olympics, or the Alzheimer’s Association have been suggested by the family.

The family of Edward "Bucky" Hanson created this Life Tributes page to make it easy to share your memories.

Send flowers to the Hanson family.