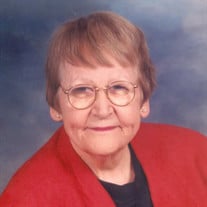 RACINE - Elaine I. Fish, 93, passed away to eternal life on Friday, May 17, 2019. She was born on May 11, 1926 in Rockwell City, Iowa. She was a teacher in the Racine Unified School District from 1966 until her retirement in 1986. Before that she was employed as Director of the Nursery School at Family Service of Racine for nine years. Also, she was Director of Christian Education at Christ Church, United Methodist for two years. Prior to that, she was a teacher in Iowa public schools for five years. She graduated from the University of Northern Iowa, Cedar Falls, Iowa with a B.A. degree. She also had received a M.A. degree from Northwestern University and Garrett-Evangelical Theology Seminary, Evanston, IL. In addition, she received a M.S. degree from the University of Wisconsin, Milwaukee. She was a member of Delta Kappa Gamma, the American Association of University Women, Racine County Retired Teachers and Wisconsin Retired Teachers Association. Surviving are two nieces, Carolyn (Donald) Brown of Estherville, Iowa, and Rita Pell of Milan, IL; two grand nephews, one grandniece, two great grandnieces, two great grand nephews and special friend, Judy Schultz. Elaine was preceded in death by her parents; Joseph and Mildred Fish; three sisters, Myra Jo Fish, Maxine (James) Pell, and Rogene (Orville) Walters, one niece, Roberta (A.C.) McIntosh, one nephew, Dennis Walters, and great nephew, Christopher McIntosh, A memorial service will be held at FaithBridge Church - Franksville Campus, 10402 Northwestern Ave., Franksville, 53126, on Tuesday, May 28, 2019 at 3 p.m., with John Fleming officiating. Interment will be in Garfield Cemetery in Lytton, Iowa. There will be a visitation from 2:30 p.m. until time of service. Memorials to FaithBridge Church – Franksville Campus and Garrett-Evangelical Theological Seminary have been suggested. The family would like to thank the staff at Oakridge Care Center for the loving and compassionate care.

The family of Elaine I. Fish created this Life Tributes page to make it easy to share your memories.

Send flowers to the Fish family.