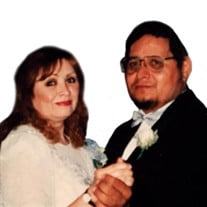 RACINE - Elia G. (nee: Cruz) Mendez, 69, passed away on Monday, July 8, 2019 at Villa of Lincoln Park. She was born in Racine on April 10, 1950, the daughter of the late George and Argentina (nee: Guyllen) Cruz. On June 22, 1985, Elia was united in marriage with Rodrigo 'Jerry' Mendez. She enjoyed reading, drinking tea, listening to her “oldie’s” music, most of all, she loved spending time with her family, her dog, Harley, and especially her grandchildren. Elia is survived by her children, Erica (Jeffrey) Rodriguez and Joe (Debbie) Vasquez; grandchildren, Ryan, Gaby, Nick, Isabella, and Ellyanah; sisters, Mary Cruz, Ermalinda (Mike) Nelson and Esther (Ralph) Hall; brothers, George Jr, David and Larry Cruz. She is further survived by nieces, nephews, other relatives and friends. Elia was preceded in death by her husband, Rodrigo 'Jerry' Mendez on March 21, 2016 and her sister, Sylvia LaCosse. Funeral services will be held at Sturino Funeral Home on Friday, July 12, 2019 at 11 a.m. There will be a visitation at the funeral home before services from 10 a.m. until time of service. Elia will be laid to rest next to her husband at Calvary Cemetery. In lieu of flowers, memorials to the family would be greatly appreciated.

The family of Elia G. Mendez created this Life Tributes page to make it easy to share your memories.

Send flowers to the Mendez family.