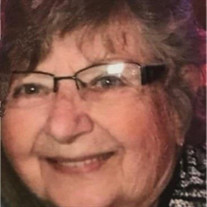 Elizabeth Chalker 11/7/35 – 4/14/20 Elizabeth “Betty” (nee: Prentice) Chalker passed away in Union Grove on April 14th in the presence of her loving family, several of whom provided diligent care and support in her final days. Comfortable in the spotlight, Betty had an innate flair for the dramatic; as such, no one was particularly surprised she chose a global pandemic as the backdrop for her grand finale. A lifelong resident of Racine, Betty was born to Margaret (Constable) and John Prentice in 1935. A fervent believer in the importance of family, Betty’s proudest accomplishments were raising her four children – Larry, Lon, Lori, and Lana – to be happy, compassionate, and selfless people. The course of her life changed in the early 1970s thanks to a stack of quarters and a load of whites. Betty met Charles Chalker at a laundromat and the couple was married at Grace Chapel Church in 1972. For decades, their love served as a life-changing cornerstone not just for their family, but for a countless number of West Racine kids who grew up the benefactors of Betty and Chuck’s kindness. The corner of West Lawn and 13th was a place filled with love, laughter, and life lessons. At Betty and Chuck’s, the pool was always open, kids always had a place to nap, snacks were plentiful, and if it was your birthday, well, a gift would be waiting. For over 40 years, Betty’s affection for children and philanthropy manifested itself in her commitment to the Girl Scouts of Racine County. She was a troop leader, founder of the annual Father-Daughter Dinner Dance, an organizer of Trefoil Oaks overnights, and a frequent visitor to parties, parades, and pumpkin farms. If something festive was unfolding in Racine, rest assured Betty and her girls would be there. More than most, she delighted in life’s little pleasures. A trip to Pine Lake. Playing Mrs. Claus to Chuck’s Santa. A wedding floor boogie. A thrift store treasure. A ride in her Chrysler convertible. Dessert. Desserts rather, plural, all of them piled high on a little paper plate and consumed before the meal itself. Betty knew how sweet life was, and she savored its meaningful moments. Many of those involved scratch-off lottery tickets delivered by Larry. Sporting her signature smirk as she scraped away the grey flecks of dust, Betty was never upset when she lost. Perhaps that’s because she was keenly aware of her luck in the lottery of life, an unending fortune paying dividends in the form of raucous holiday dinners, great-grandchild hugs, and a constant stream of visitors to her home, everyone eager to pull up a chair and take a seat at her table. Betty was preceded in death by Chuck, her husband of 46 years; her mother, Margaret Prentice; father, John Prentice; grandson, Shane Radcliff; and brothers-in-law, Donald Beckett and James Gast. She is survived by her children, Larry (Cindy Lou) Radcliff, Lon (Linda) Radcliff, Lori (Jim) Henderson, and Lana (Patrick) Krueske, as well as her sisters, Margaret Beckett and Bonnie Gast, her brother, John Prentice, and nine grandchildren and twenty-four great grandchildren. In accordance with COVID-19 restrictions, a private visitation and service will be held at Sturino Funeral Home. Together once again with Chuck, Betty will be buried alongside her loving husband at the Southern Wisconsin Veterans Memorial Cemetery. The family wishes to thank Hospice Alliance for their care and compassion. In lieu of flowers, the family encourages contributions to Girl Scouts of Wisconsin Southeast and the Wisconsin Stars and Stripes Honor Flight.

The family of Elizabeth "Betty" Chalker created this Life Tributes page to make it easy to share your memories.

Send flowers to the Chalker family.