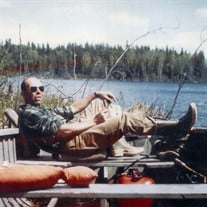 Ernie I. Iversen -RACINE - 90, passed away on Monday December 16, 2019 at his residence. He was born in Racine on November 24, 1929, the son of the late Ivar and Paula (nee: Elmgren) Iversen. In 1947, Ernie joined the United States Army. He proudly served his country until he was honorably discharged in 1950. On September 18, 1954, Ernie was united in marriage to Patricia McCombs. They were married for 52 years, until her passing in 2007. Ernie worked at S.C. Johnson & Sons as an Expeditor for over 30 years, retiring in 1988. He moved to Orlando, FL in 2004, and returned to Racine in 2010. Ernie was an avid golfer and outdoorsman. Surviving are his children, Diane Iversen of Seattle, WA, Cheryl Iversen of Racine, and Thomas (Angela) Iversen of Oviedo, FL; grandchildren, Alec Reed, and Quinn and Madison Iversen. He is further survived by other relatives and friends. Ernie was preceded in death by his wife, Patricia Iversen, and sister, Greta Jacobsen. A memorial service with full military honors will be held at Southern Wisconsin Veterans Memorial Cemetery on January 3, 2020 at 1 p.m. He will be laid to rest next to his wife, Patricia. The family would like to thank Anna Hart for her patience, love and care she showed our dad during his last years.

The family of Ernie I. Iversen created this Life Tributes page to make it easy to share your memories.

Ernie I. Iversen
-RACINE - 90, passed away on Monday December...

Send flowers to the Iversen family.