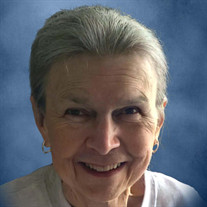 Florence Marie (nee: Thomsen) Dupuis, 93, resident of Racine, passed away on Thursday, September 23, 2021. Flo was a lifelong resident of Racine, born on May 10, 1928, the daughter of Danish Immigrants, the late Emil and Mary (nee: Jensen) Thomsen. She was a Horlick High School graduate and worked at Western Printing for many years. Flo met Richard Dupuis at The Polish Dance Hall in Racine while he was on leave from the Navy. On June 6, 1953, Flo was united in marriage to Richard at Bethania Lutheran Church. As a devoted Navy wife, Flo raised four children at numerous Naval bases around the country. After Richard’s retirement, they settled back in Racine with their children. Flo also was a member of the Circle Eight Square Dance Club for more than 20 years. She enjoyed traveling, and spending time with her family and friends. Flo was an avid sports fan. She especially enjoyed watching the Wisconsin Badgers, Marquette, Milwaukee Bucks, and the Green Bay Packers. Above all, she was a loving and caring wife, mother and grandmother. She will be deeply missed by all. Flo is survived by her children, William (Cindy) Dupuis of Janesville, Michael (Heidi) Dupuis of Salem, OR., Scott (Fiore) Dupuis of Jacksonville, FL., and Denise Stark of Racine. Ten grandchildren, Christine (Joe), Jason (Katie), Jonathan (Nicole), Jack, Kimberly, David, Kristine, Nicholas (Nicole), Matthew, and Thomas; and ten great grand children. She is further survived by sister, Diane (Joseph) Yust; sisters-in-law, Joyce Thomsen, and Arlene Dupuis; nieces, nephews, other relatives, and friends. Florence was preceded in death by her husband, Richard on January 28, 2007; brother, Arthur Thomsen; and son-in-law, Gregory Stark. Visitation will be held at Sturino Funeral Home on Saturday, October 23, 2021, from 11 a.m. until service time at 12 noon. In lieu of flowers, those wishing to remember Flo in a special way may direct memorials to Bethania Lutheran Church or a charity of one's choice. Florence’s family would like to extend a heartfelt thank you to Dr. Adam Wallace and the staff at Columbia St. Mary's Hospital in Milwaukee for giving our family extra time with her. DUE TO COVID RESTRICTIONS, masks will be required. Thank you for your understanding.

Florence Marie (nee: Thomsen) Dupuis, 93, resident of Racine, passed away on Thursday, September 23, 2021. Flo was a lifelong resident of Racine, born on May 10, 1928, the daughter of Danish Immigrants, the late Emil and Mary (nee: Jensen)... View Obituary & Service Information

The family of Florence "Flo" Dupuis created this Life Tributes page to make it easy to share your memories.

Send flowers to the Dupuis family.