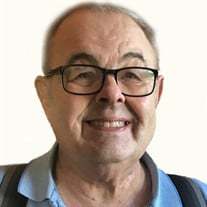 Frank Ray Horn, 74 passed away peacefully surrounded by family on January 24, 2020 at Ascension Hospital in Racine, WI. He was born on August 6th, 1945 to Frank and Roberta (Oost) Horn in Woodstock, IL. He married Rosie Rey on July 2, 1977 at Trinity Lutheran Church in Harvard. Frank lived in Harvard, IL his entire life. He started working at a young age for his father at Horn’s Shell Service in Harvard. When his father retired he took over management of the business for a few years. Frank enjoyed serving others by pumping gas, checking oil and washing windshields. He went on to work at Farm and Fleet, then at the Stratford Banquet Hall before he settled back into what he loved best at the Lil’ Corner Store as a full service gas attendant until 2014. Frankie was known for always being there to help, his smile and his boisterous personality. He had a sharp memory of dates and Harvard happenings. He was a family man and always enjoyed stopping to visit his aunts, uncles and cousins. He enjoyed fishing, spending time with his dog, tinkering with his truck, reading and watching TV. He took extraordinary care of his wife, Rosie during her battle with cancer. He was a loyal son-in-law, caring for his mother-in-law, Rosario Rey, whom he felt was like a mother to him too. He was an amazing father, always there to guide and save the day. He adored his grandchildren and, knowing how short life is, appreciated every minute. He is survived by his daughter, Jennifer Barncard, her husband Brian, their children, Nicolas and Rosie and his beloved dog, Kermit. Frank is also survived by many other family and friends including cousins and nieces. He was preceded in death by his parents, his wife, Rosie, his mother in law, Rosario and his sister, Sue Dimick. A memorial service will be held in March at Trinity Lutheran Church in Harvard, IL. A date is still yet to be determined. His final resting place will be with Rosie at Mount Auburn Cemetery in Harvard. Thank you to all the amazing staff at Home Harbor, The Villa and Ascension for your compassionate care for Frank. He always said “they take good care of me”.

Frank Ray Horn, 74 passed away peacefully surrounded by family on January 24, 2020 at Ascension Hospital in Racine, WI. He was born on August 6th, 1945 to Frank and Roberta (Oost) Horn in Woodstock, IL. He married Rosie Rey on July 2, 1977 at... View Obituary & Service Information

The family of Frank Ray Horn created this Life Tributes page to make it easy to share your memories.

Send flowers to the Horn family.