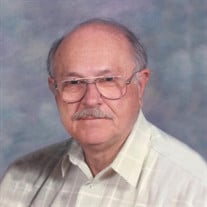 CALEDONIA- Frederick J. Johnson, 92, passed away peacefully on Wednesday, November 18, 2020 at Ridgewood Care Center. He was born on December 2, 1927 to the late Fritz and Adelaide (nee:Sommerfeld) Johnson in Racine, WI. On June 21, 1952, Fred was united in Marriage to Carol (nee:Tigges) at First Evangelical Lutheran Church in Racine. Fred was an active lifetime member of First Evangelical Lutheran Church, serving as Treasurer at First Evangelical Lutheran Church for over 40 years. He proudly served in the United States Army during the Korean War. Fred was a store manager at Esser Paint and Glass, retiring in 1996. He enjoyed collecting stamps, gardening, restoring antique furniture, family history and genealogy. Fred is survived by two sons, Frederick (Cristina) Johnson of Virginia Beach, VA, and David (Donna) Johnson of Racine; eight grandchildren, Isabella, Beth, Renata, Frederick "Fritz", Christopher, Samantha, Michael and Louie; great grandchildren, Tim, Max, Luca and Elisa and sister-in-law, Marion Olson. He is further survived by Del Roberts, nieces, nephews, other relatives and friends. Frederick was preceded in death by his wife, Carol on March 2, 2015; son, Stephen on July 21, 2016; an infant son, Theodore James Johnson; daughters-in-law, Luann and Carolyn Johnson. Funeral services will be held at First Evangelical Lutheran Church, 728 Villa Street on Wednesday, November 25, 2020 at 11:00 a.m. Fred will be laid to rest next to Carol at West Lawn Memorial Park. Visitation will be held at Sturino Funeral Home on Tuesday from 5:00 until 7:00 p.m. and Wednesday at the church from 10:00 a.m. until time of service. The family would like to extend a special thank you to Ridgewood Care Center, Moments Hospice and Parkview Gardens for all the compassion and care they gave to Fred. In lieu of flowers, memorials to First Evangelical Lutheran Church have been suggested by the family.

The family of Frederick J. Johnson created this Life Tributes page to make it easy to share your memories.

Send flowers to the Johnson family.