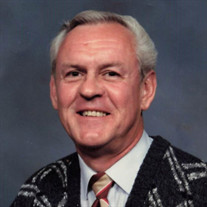 CALEDONIA-Frederick William Manske, 84, passed away peacefully at Ascension-All Saints on Monday, September 20, 2021. Fred was born in Racine on December 22, 1936 to the late Bernard and Lolita (Henningfield) Manske. He was a graduate of William Horlick High School, Class of 1955. After graduation, Fred went on to serve in the United States Army in Korea from 1957 to 1960. He was a member of Ducks Unlimited, Salmon Unlimited, Racine County Conservation League, Little John’s Archery Club, Johnson’s Fishing Club, JMBA, and a former member of St. Paul’s Lutheran Church. Fred worked for S.C. Johnson Wax for over 40 years. In his free time, he enjoyed spending time outdoors. Fred liked to hunt and camp, but his greatest love of all was fishing. He will be missed by his children, Christopher (Angela Sandleback) Manske; Owen (Lisa) Manske, Nicole (Anthony) Tempesta; grandchildren, Brennon (Erica), Braedyn, Grace, Simon, Fiona, Justice, Lucy, Vincent, Mario, and Andrew; great-grandchildren, Violet and Iola; special friend, Pamela, former wife and mother of his children, Virginia, and his sister-in-law, Shirley Manske. Fred is further survived by nieces, nephews, other relatives and close friends. Fred goes on to be reunited with his sister, Janet Madsen; brothers, Jack and Tom Manske and niece, Noreen Manske-Ollerman. A memorial service will be held at Sturino Funeral Home on Saturday, October 2, 2021, at 11 a.m. There will be a visitation at the funeral home from 10 a.m. until time of service. In lieu of flowers, memorials may be made to one’s favorite charity. Fred’s family would like to extend a special thanks to the entire staff at Ascension-All Saints for their loving care.

CALEDONIA-Frederick William Manske, 84, passed away peacefully at Ascension-All Saints on Monday, September 20, 2021. Fred was born in Racine on December 22, 1936 to the late Bernard and Lolita (Henningfield) Manske. He was a graduate of William... View Obituary & Service Information

The family of Frederick William Manske created this Life Tributes page to make it easy to share your memories.

Send flowers to the Manske family.