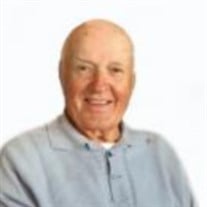 RACINE-Gabriel “Gaby” Platzer, 88, went to be home with his Heavenly Father on Friday, October 2, 2020 at his residence. He was born in Austria on July 18, 1932 to the late Franz and Maria Platzer. On May 30, 1959 Gaby was united in marriage to Hertha Reimann at St. John Lutheran Church. They celebrated 54 years of marriage together. Upon his retirement from Massey Ferguson after 42 years, he worked part-time for Merchants Moving for more than 10 years. Gabriel was very proud of his citizenship in the United States and was one of the oldest members of the Racine German Club, Deutscher Manner Verein. He was a Brewer and Packer fan and enjoyed listening to the German Hour every Saturday. Gaby enjoyed fishing; sitting in his yard watching birds and dancing in his younger days with Hertha. He is survived by his son, Mark (Angel) Platzer; brother-in-law, Erhard Reimann; sister-in-law, Amanda (Heinz) Koenig of Hamburg Germany; nieces and nephews, Andy Reimann, Chris (Jen) Reimann, Dina (Mark) Tabbert, Art (Kim) Steege and their families in the U.S.; Sepp, Maria Augustin, Franz, Josef Platzer and their families in Austria. He is further survived by other relatives and friends, both in the United States and Austria. Gabriel is preceded in death by his wife Hertha on October 4, 2013; brothers, Josef and Franz Platzer; sister, Maria Augustin; sister-in-law, Marge Reimann; brother-in-law, Arthur Reimann; niece, Debbie Reimann and nephew, Eduard Platzer and in-laws, Reinhold and Olga Reimann. Funeral service will be held at St. John Lutheran Church, corner of Erie and Kewaunee Streets, on Friday, October 9, 2020 at 11 a.m. There will be a visitation at the church from 10 a.m. until time of service. He will be laid to rest with Hertha at West Lawn Memorial Park in a private ceremony. Memorials may be directed to St. John Lutheran Church.

The family of Gabriel "Gaby" Platzer created this Life Tributes page to make it easy to share your memories.

RACINE-Gabriel “Gaby” Platzer, 88, went to be home with his Heavenly...

Send flowers to the Platzer family.