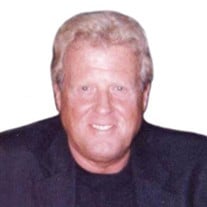 Gary Karl Haug, age 77, passed away Sunday, February 20, 2022. Preceded in death by his wife Taraesa Wheary Haug, parents Karl and Roberta Haug, brother Glenn Haug, and twin Larry (Cynthia) Haug. Loving father of Derek (Lindy) Haug, and Rachel (Dustin) Finley. Dear brother of Carol (Milt) Ancevic. Uncle of Michael (Jennifer) Ancevic, Brian and Melissa Haug. Proud grandpa of Ashlynn, Sawyer, and Presley. Gary was born June 11, 1944. He was raised in Kenosha, WI and spent his adult life in Racine, WI. Gary served his country in the Navy during the Vietnam War, where he also met longtime friend Jim Stover. He was proud of going back to college later in life to earn a Bachelor’s degree from Concordia University. Gary held numerous positions in his 40+ year career at AT&T. Gary was a member of the Kiwanis Club and enjoyed driving around town and in the local parades in his red Miata. He loved to travel with his late wife Tari, especially to the Dominican Republic, Door County, and Mackinac Island. Gary was always outside doing yardwork. He took pride in the upkeep and appearance of his yard. He adored his kids and 3 grandchildren and was proud to give away his daughter Rachel on her wedding day. Family was very important to Gary. His final days were spent surrounded by his family. He will be greatly missed by many. A visitation will be held on Friday, February 25, at Sturino Funeral Home, 3014 Northwestern Avenue, Racine, WI 53404 from 10:30 AM until services at 12:00 PM. A luncheon to be held immediately after at Infusino’s Restaurant 3225 Rapids Dr, Racine, WI 53404. Private interment at West Lawn Memorial Park. In lieu of flowers, donations to the American Cancer Society would be appreciated.

The family of Gary Karl Haug created this Life Tributes page to make it easy to share your memories.

Send flowers to the Haug family.