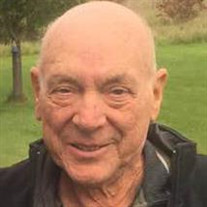 RACINE - Gene Michael Betthauser, 74, entered Heaven on Wednesday, January 16, 2019 after an extended and courageous battle with cancer. Gene was born on June 9, 1944 in Sparta, WI, son of the late Michael and Margaret (nee: Finucan) Betthauser. He was raised in New Lisbon where he and his brothers enjoyed the outdoors. The family later moved to Mauston, where he attended high school. Gene moved to Racine as a young man. He worked at Belle City Foundry, and later at Case NH, retiring in 2003 with over 20 years of service. Gene was a skilled craftsman. He enjoyed fixing cars, woodworking and repairs around the house. If he didn't know how to fix it, he would figure it out. Gene adored teaching these skills to his sons and grandchildren. During the past few years, he worked with his son to lead the woodworking project for Raymond 4-H. Gene kept an impeccable yard. He loved to be on the lawn mower and working in the garden. He enjoyed watching to see which daffodils would bloom first in the spring, and monitoring the fence around his vegetable garden to keep the rabbits out. He loved finding a new Hosta to add to his collection or seeing what new flowers he could grow or share. Gene was blessed with numerous friends who kept a close eye on him. He enjoyed hashing the news with the guys and waitresses over their daily breakfast. He looked forward to annual fishing trips to South Dakota. There were many happy times spent in the boat on the Missouri River. Gene loved a good laugh, and picking on those he loved. As much as Gene loved his friends, there wasn't anyone whom he loved more than his children and grandchildren. He spent hours helping them with projects around their house, or having Sunday lunches to watch the Packers games. His grandchildren were the apple of his eye. He was their babysitter and mentor. He taught them how to fix things and enjoyed taking them out for special lunches. He never missed an important event, and was so proud of their accomplishments. He will be missed by his sons, Phil (Kallie Urban) Betthauser, and Michael (Robin) Betthauser; grandchildren, Jack, Paige, and Grace Betthauser; brothers, Gary (Connie) Betthauser, and Harold (Marilyn) Betthauser. He is further survived by nieces, nephews, other relatives and friends. Funeral services will be held at Sturino Funeral Home on Tuesday, January 22, 2019 at 6:30 p.m. Visitation will take place at the funeral home from 4:30 p.m. until the time of service.

The family of Gene Michael Betthauser created this Life Tributes page to make it easy to share your memories.

Send flowers to the Betthauser family.