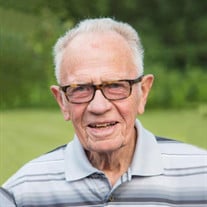 RACINE-George Francis Terry, 93, passed away on Thursday, December 3, 2020. George came into this world on August 22, 1927 with a deck of cards in his hand, the son of the late Henry and Louise (nee: Fonk) Terry. He said he didn’t ever remember not knowing how to play Schafkopf, and that was his card game of choice for his entire life. While working at a grocery store at the age of 15, he spotted a pretty red-haired girl and bought her an ice cream cone. So began a love affair with his wife of 73 years. George married his sweetheart, Patricia Smith, on September 27, 1947 and together they raised five red-haired children. After graduating from high school, he joined the United States Army where he enjoyed his service as a cook. He was co-owner of Aluminum Fence Company until he retired in 1989. Because the business was seasonal, it gave George and Pat the luxury to travel during the winter months. Their travels took them to Florida, Hawaii, Texas, Bahamas, East Coast, Alaska and Canada. After retirement, George and Pat became snow birds and spent their winters in Arizona. George enjoyed fishing, hunting, bowling, golfing and playing Schafkopf. He was a past member of St. Sebastian‘s Church, Our Lady of the Lake Church in Lake Havasu City, AZ, more recently St. Paul the Apostle Parish. George's family was of utmost importance to him and his moral compass was deeply rooted in his Catholic faith. Upon hearing of George's death, these words spoken by a friend to the family confirmed this. “Your father was a true patriot, honest to the bone and a righteous man of God.” Survived by his wife Pat; children, Linda (Jerry) Auger, Sandra (Keith) Radke, Catherine Fisher; grandchildren, Rebecca (Jon Robbins) Mulder, Kim (Bryan) Zamora, Laura (Jennifer) Abrams and Jordan Bishop; great grandchildren, Brittany (Kyle) Lucier, Dakota Winiger, Shane (Jordan) St. Pierre, Rhiannon Mulder and William Mulder; great great grandchildren, Adelynn, Lacey, Kellen and Warren. He is further survived by nieces, nephews, other relatives and friends. George was preceded in death by his sons, Richard and Robert; brother and best friend, Wallace; sisters, Alice Vandenboom and Ione Robers; sons-in-law, Dennis Jensen and Jack Fisher, double first cousins who were more like siblings, Wilbur Terry and Marie Fredericks. Private Mass of Christian Burial was held at St. Paul the Apostle Parish. George has been laid to rest at West Lawn Memorial Park with full military honors. In lieu of flowers, memorials to the Alzheimer’s Association have been suggested.A special thank you to George’s Cardiologist, Dr. Michael Papp, V.A. Home Care Health team, Allay Hospice and his Angels at Parkview Gardens.

RACINE-George Francis Terry, 93, passed away on Thursday, December 3, 2020. George came into this world on August 22, 1927 with a deck of cards in his hand, the son of the late Henry and Louise (nee: Fonk) Terry. He said he didn&#8217;t ever... View Obituary & Service Information

The family of George Francis Terry created this Life Tributes page to make it easy to share your memories.

Send flowers to the Terry family.