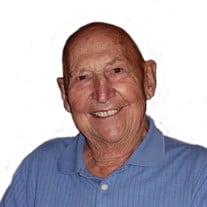 Gerald "Gerry" Donald Hiawatha Renpaul RACINE - Gerald Donald Hiawatha Renpaul, 94, passed away at his home on Monday, June 15, 2020. He was born to the late Louis Bernard and Ella Dorothea Louise (nee: Meyer) Renpaul on April 27, 1926 in Racine on the property now known as The Racine Quarry Lake Park. His dad flew the coop when he was 14 months old and left Ella with two children from his first wife who had passed away and four children with her. Gerry was a devil in his younger years and grew up to be a half decent man. In his younger years he had numerous jobs at Racine Country Club, Cold Spring Beverage Co, Chicago Rubber, Armour Meat, J I Case (3 times), Hamilton Beach and Fox Ice Co. He hitch hiked to New York, worked at Bickford’s Restaurant in New York long enough to earn money to take a bus back to Racine. Gerry then worked at Webster Electric, Modine, Pittsburg Steamship Co, Massey Harris, Teleoptic Co. and finally beginning in August 1950, he was hired as a maintenance man at In-Sink-Erator, becoming a lead maintenance man and electrician. Gerry retired from In-Sink-Erator on May 31, 1985. He helped to decertify the union UAW AFL-CIO local 1264 from In-Sink-Erator in the 1960's. It took two different times before the union was decertified. Also, in 1950 Gerry met the love of his life, Nancy Lee Wood. He married Nancy on June 9, 1951 at St. John's Lutheran Church. They had five children. They enjoyed going up north on vacation, either camping or renting a cottage. In 1972 Gerry and Nancy purchased a tree plantation in Mt. Morris, WI, Wautoma area in Waushara County. Gerry had about 8 1/2 to 9 years of schooling. Eight years at Rapids School, some at Washington Jr. High School and some at Racine Vocational School. He enjoyed going up north, fishing with his friends, playing golf, playing fast pitch ball, ice skating, sledding with his children and looking for golf balls. He is survived by his children, Judith Ann (Tom) Scheel of Minocqua, WI, Ruth Lee (Jon) Tylock of Racine, twins, Nancy Renee Renpaul of Racine and David Gerald Renpaul of Colorado Springs, CO; grandchildren, Nicole Ramirez, Jason Scheel, Rachael (David Vargas) Renpaul, Jaron Tylock, Allison Tylock, twins, Karly Fitchett and Leila Fitchett; great grandchildren, Kool, Daisy, twins, Gianna and Raina, Kora Lee, Serena, Niola and Lennon. He is further survived by his sister, Violet Geranium Rose Yorgan, dear friend, Lynnie Studey, nieces, nephews, other relatives and many friends. Gerry was preceded in death by his wife, Nancy on May 30, 1981, daughter, Geri Lynn Wells in 2013; brother, Bernie (Scotty) Renpaul, sister, Niecie (John) Kralicek; step-sisters, Ginna (Chuck) Johnson and Jenny (Gilbert) Andersen and dear friend, Gladys Toler. A visitation for Gerald will be held at Sturino Funeral Home on Monday, June 22, 2020 from 12 p.m. until 1:30 p.m., with a procession to Graceland Cemetery for a committal service following. In accordance with the city of Racine mandate, only 25 people are allowed to enter the funeral home at a time. You may be asked to wait outside until others have left the building. For the safety of our guests, we do ask that those in attendance wear a mask or face covering. We thank everyone for their understanding as we navigate these difficult times. A celebration of Gerry’s life will be held at a later date. Memorials to the Alzheimer’s Association have been suggested by the family. A special thank you to Lynnie for taking my dad for rides, reminiscing around Racine, the city he loved. This obituary was written by Gerry himself.

The family of Gerald "Gerry" Donald Hiawatha Renpaul created this Life Tributes page to make it easy to share your memories.

Send flowers to the Renpaul family.