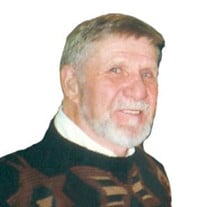 Gerald F. G. Hansen RACINE - Gerald "Jerry" F. G. Hansen, 86, passed away on Tuesday, August 7, 2018 at Ascension Hospital. He was born in Racine on August 24, 1931, the son of the late Albert and Leona (Gondert) Hansen. Jerry was a graduate of Wm Horlick High School, and he proudly served his country in the United States Army. On May 17, 1958, Jerry was united in marriage to Lucille A. Lotharius at St. Mary's Catholic Church. He was a Teamster at Western Publishing for many years, where he eventually retired. Jerry was a member of the American Legion Post 494. He enjoyed golf, reading, and animals - especially the birds in his yard. Jerry was a kind man, and was loved by many people. While visiting his wife in the nursing home, he would visit with the other residents, often bringing them suckers. He was befriended by many of them, and truly cared about them. Jerry was a caring and giving man, always willing to help, always willing to listen. He was the best husband and father. Jerry will be missed by his wife, Lucille; children, Kathy Jacobson, and Linda (Danny) Michel; granddaughters, Emily (Ashraf Islam) Oertel, and Molly (Mike Wrycza) Jacobson; great grandsons, Oliver and Colin Oertel, and his sister, Ione "Susie" (James) Jander. He is further survived by other relatives, and many dear friends. Jerry was preceded in death by his siblings, Caroline (Norm) Nelson, Margaret Hansen, LeRoy (Betty) Hansen, George "Butts" Hansen, Lloyd “Bunky” Hansen, Donald (Darlene) Hansen, and Harvey Hansen. A celebration of life will be held at Sturino Funeral Home on Jerry's birthday, Friday, August 24, 2018 from 10:30 a.m. until 12 p.m. He will be laid to rest at 1 p.m. at Southern Wisconsin Veterans Memorial Cemetery.

Gerald F. G. Hansen RACINE - Gerald "Jerry" F. G. Hansen, 86, passed away on Tuesday, August 7, 2018 at Ascension Hospital. He was born in Racine on August 24, 1931, the son of the late Albert and Leona (Gondert) Hansen. Jerry was a graduate... View Obituary & Service Information

The family of Gerald F.G. Hansen created this Life Tributes page to make it easy to share your memories.

Send flowers to the Hansen family.