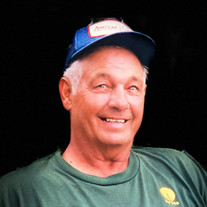 Gerald “Jerry” B. Urick, 84, passed peacefully in his Caledonia, WI home on January 22, 2020. Jerry was born in Marshfield, WI on November 11, 1935 to Nikolas and Agnes (nee: Domres) Urick. He is a graduate of Horlick High School. A retiree of JayDee Contractors since 1999, Jerry filled his life with fishing, golf, friends and family. He was also member of Moose Lodge #437. Jerry is survived by his sons; Gerald Urick, and Randy (Mary) Urick; daughters, Carrie Wolosyn, Gabriel Fortier, and Jacqueline Urick, many grandchildren and great grandchildren; as well as, countless dear family friends who called him “Pa”. He was preceded in death by his parents, daughter, Debra; wives, Nancy (nee: Barett), and Elsa (nee: Franco), brother, Richard, and his sister, Rosie. Funeral services for Jerry will be held at Sturino Funeral Home on Tuesday, January 28, 2020 at 2pm. Visitation will take place at the funeral home from 12 p.m. until the time of service. Private inurnment will take place at a later date.

The family of Gerald "Jerry" Urick created this Life Tributes page to make it easy to share your memories.

Gerald “Jerry” B. Urick, 84, passed peacefully in his Caledonia,...

Send flowers to the Urick family.