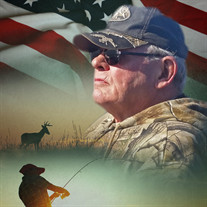 MT. PLEASANT – Gordon H. Anderson, 69, passed away at his residence on Monday, August 26, 2019. He was born in Ashland on November 12, 1949, the son of the late Roy and Margaret (nee: Stadler) Anderson. Gordy was a graduate of Drummond High School. He proudly served in the United States Army. Gordy was united in marriage to Amelia “Amy” Hoffman on June 16, 1973. He retired from USF Holland as a truck driver and was a member of the Teamsters Union. Gordy loved the great outdoors, fishing, hunting, being up north and his grand dogs, Mason and Buck. He was an avid Packer fan. Surviving are his daughters, Tammy Hoffman -Anderson and Melissa Anderson; grandson, Billy Flores; brothers, Richard "Richie", Donnie, Ronald "Moto" and Alvin; sisters, Arlene and Liz. He is further survived by many relatives, friends. Gordy was preceded in death by his wife, Amy; brothers, Paul, Jim, George, Jerry and Mark. A memorial service with full military honors will be held at Sturino Funeral Home on Saturday, August 31, 2019 at 11 a.m. There will be a visitation at the funeral home from 10 a.m. until time of service. Private inurnment will take place at Southern Wisconsin Veterans Memorial Cemetery.

The family of Gordon H. Anderson created this Life Tributes page to make it easy to share your memories.

MT. PLEASANT – Gordon H. Anderson, 69, passed away at his residence...

Send flowers to the Anderson family.