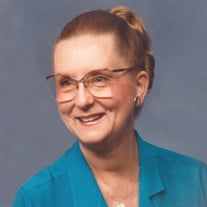 Grace Lorraine (nee: Mathieus) Petersen, 91, passed away at home on Monday, February 14, 2022. She was a lifelong resident of Racine, born on April 13, 1930, the daughter of the late Homer and Emily (nee: Sherwood) Mathieus. Grace was a graduate of Wm. Horlick High School "Class of 1949." On October 7, 1950 she was united in marriage to Donald H. Petersen at Bethal Methodist Church. Grace's working career began at Hamilton Beach at the switchboard and reception desk. Later she was employed at St. Mary's Hospital, working in admitting and at the switchboard for 21 years, retiring in 1998. She was a former member of 1st Methodist Church, where she enjoyed singing in the choir. Grace and Don had bowled on couples leagues for many years and together they had a love of travel. They shared many annual trips to Las Vegas and in later years at nearby casinos. They also had many trips to different Caribbean islands and had taken two trips to Hawaii. One of their most memorable trips was when they took their then young sons, on a cross country vacation for a month, touring many of the national parks. Grace loved music and had taken voice lessons and sang for weddings. She also had a love of art and had the opportunity to do photography painting for Charles Studio. Surviving are her children, Thomas S. Petersen and Daniel S. Petersen, both of Mt. Pleasant; grandchildren, Ashley Petersen and Joshua Petersen and a great grandson, Levi; sisters-in-law, Kathy (Frank) Cetrano and Sally Mathieus; brothers-in-law, Robert Petersen and Richard Petersen. She is further survived by many other relatives and friends. Grace was preceded in death by her husband, Don; two brothers, Richard Mathieus and David Mathieus; sisters, infant sister, Lorraine Mathieus and Doris (Glen) Sorenson; sisters-in-law, Grace Petersen, Barbara Petersen, and Eleanor Thill; and brother-in-law, Frank Thill. Memorial services will be held at Sturino Funeral Home on Tuesday, February 22, 2022, at noon. Visitation will be held from 11:00 a.m. until time of service. Grace will be laid to rest at West Lawn Memorial Park. In lieu of flowers, the family requests that donations be made to the American Cancer Society.

Grace Lorraine (nee: Mathieus) Petersen, 91, passed away at home on Monday, February 14, 2022. She was a lifelong resident of Racine, born on April 13, 1930, the daughter of the late Homer and Emily (nee: Sherwood) Mathieus. Grace was a graduate... View Obituary & Service Information

The family of Grace Lorraine Petersen created this Life Tributes page to make it easy to share your memories.