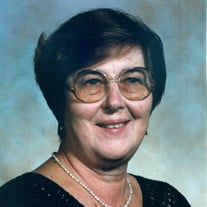 Grace Verhaeghe RACINE - Grace (nee: Vermeire) Verhaeghe, 99, passed away in peace on Wednesday, February 13, 2019 at Ridgewood Care Center. She was born on August 4, 1919 in Union Grove, the daughter of the late August and Marie (nee: DeBates) Vermeire. On September 13, 1941, Grace was united in marriage to George Verhaeghe at St. Mary's Church in Racine. Grace was a loving wife and mother. She raised five children and actively cared for seven grandchildren. Two of Graces greatest qualities in life were her kindness and generosity for people in need, she was always there for anyone who needed her help. She was passionate about being a volunteer and member of the St. Vincent DePaul Society and the Women's Auxiliary at St. Mary's Hospital for 20 years. She was a member of Sacred Heart Catholic Church for over 60 years. Grace enjoyed being with her family first and foremost, golfing, painting, traveling the world, playing cards, especially bridge and poker, and loved to read; her favorite pastime. The last three years of her life she spent at the Elizabeth Gardens Assisted Living where she made many close friends. Grace is survived by her children, Timothy A. Verhaeghe of Ferndale, WA, Susan A. (Mark) Henderson of Racine, Marian L. Verhaeghe of MN; seven grandchildren, Jon (Peta) Verhaeghe, Justin (Kelly) Raab, Lauren (Joey) Arriaga , Michael (Elyce) Hoffman, Jordan, Evan Hoffman, and Alison Henderson. She is further survived by six great grandchildren, her beloved son-in-law, Irving Hoffman of Racine, and former daughter-in-law, Ann T. Knoebel of San Antonio, TX. She was preceded in death by her husband, George on April 25, 1998, son, Michael J. Verhaeghe, KIA on April 9, 1969 in Viet Nam, daughter, Elizabeth A. Hoffman on October 18, 2006 and daughter-in-law, Pamela Verhaeghe on January 26, 2019. Mass of Christian Burial will be celebrated at Sacred Heart Catholic Church, 2023 Northwestern Ave. on Monday, February 18, 2019 at 11 a.m. with Rev. Ron Gramza officiating. Visitation will be at church from 9:30 a.m. until 10:45 a.m. with mass starting at 11 a.m. Grace will be laid to rest in a private ceremony next to her husband, George at Holy Cross Cemetery, Hwy. #32. In lieu of flowers, those wishing to remember Grace in a special way may direct memorials to St. Vincent DePaul, Sacred Heart Catholic Church, or, Covenant House, 460 West 41st Street, New York, NY, 10036. We would like to thank the staff at the Elizabeth Gardens and Ridgewood for their kind and gentle care to our mom.

Grace Verhaeghe RACINE - Grace (nee: Vermeire) Verhaeghe, 99, passed away in peace on Wednesday, February 13, 2019 at Ridgewood Care Center. She was born on August 4, 1919 in Union Grove, the daughter of the late August and Marie (nee: DeBates)... View Obituary & Service Information

The family of Grace Verhaeghe created this Life Tributes page to make it easy to share your memories.

Send flowers to the Verhaeghe family.