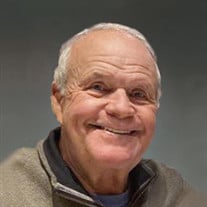 Guy Joseph Rannow 73, resident of Racine, passed away on Sunday, February 28th, 2021. Born in Racine on May 14th, 1947 to Cecilia (Eisenhauer) Fiehweg and Julius LaCanne, Guy was raised by his mother and stepfathers Richard Rannow and Donald Fiehweg. On June 28th, 1969 he was united in marriage to Linda (Benedict). Guy graduated from Washington Park High School in 1965 and earned a bachelor’s degree from UW-Whitewater in 1970. He served in the US Army reserve from 1970-1975 attaining the rank of Staff Sergeant. Guy found a passion for his many hobbies including gardening, which resulted in the title of Master Gardener. His love for fishing led him to take many trips to The Boundary Waters accompanied by friends, grandchildren, and nephews. As a traveling salesman, Guy had the opportunity to visit the majority of the states and was able to share the experiences with Linda by his side which led to making many memories around the country. To celebrate 50 years of marriage, Guy and Linda took the trip of their dreams to Eastern Europe to continue making memories around the world. Guy found a home away from home in nature and shared many memories while taking family cabin trips. Guy’s talent and joy found in woodworking lead him to craft handmade birdhouses for his own personal Guy Birds Collection. In addition to enjoying the outdoors in every possible way, he enjoyed attending garage sales during the spring and summer seasons. Guy was a dedicated Green Bay Packer fan and would never miss an opportunity to brag about the opportunity he had to go to the Ice Bowl nor to flaunt his pride in never missing a single Packer Game. Guy was a member of Faithbridge Church and lifetime member of the Racine Yacht Club. Above all things, Guy enjoyed spending time with family. He became the patriarch of all family picnics and embodied the role of a true family man. He is survived by his wife of 51 years, Linda; daughters, Kim Coan (Don), Heidi Stublaski (Steve); grandchildren Trenton, Kelsie (Patrick), Tommy, Casey, Riley, siblings Jerry Rannow (Dee), Rick Rannow (Diane), Mark Rannow (Carla), Lisa Cartwright, and many close nephews and cousins. In addition to his parents, Guy was preceded in death by stepfathers Richard Rannow and Donald Fiehweg, Inlaws George Benedict, Opal (Hannon) Benedict, brother, Gregg Rannow and brother-in-law, Scott Cartwright. Guy lived a life full of love, smiles, and youth. Guy will be remembered by most for his witty sense of humor and jokes that he had ready to be pulled out of his pocket. A visitation will be held on Saturday, March 13th, 2021, at Faithbridge Church in Franksville, WI. from 12:00 noon-2:00 p.m. followed by a service at 2:00 p.m. In lieu of flowers a donation to Faithbridge Church, Racine Yacht Club Youth Foundation, or a charity of one's choice have been suggested.

Guy Joseph Rannow 73, resident of Racine, passed away on Sunday, February 28th, 2021. Born in Racine on May 14th, 1947 to Cecilia (Eisenhauer) Fiehweg and Julius LaCanne, Guy was raised by his mother and stepfathers Richard Rannow and Donald... View Obituary & Service Information

The family of Guy Joseph Rannow created this Life Tributes page to make it easy to share your memories.

Guy Joseph Rannow 73, resident of Racine, passed away on Sunday,...

Send flowers to the Rannow family.