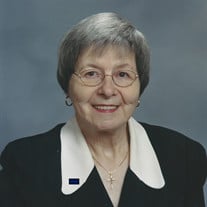 Gwen Henningsen MOUNT PLEASANT - Gwendolyn Elizabeth Henningsen, 85, passed away on June 6, 2018. She was born in Olds, Alberta on April 14, 1933 to Warren and Mable (Roy) Kemp. She lived in Olds until 1956, and attended business school at Olds Community College. In Edmonton, AB, she met Carlo Henningsen as he came out of the Artic, and they were married on July 13th, 1957. Shortly after their marriage, they moved to the Racine area. Gwen is survived by her husband of over 60 years, Carlo; son, Henning; daughter-in-law, Ginny; and grandchildren, Erika and Ryan. She is also survived by her sisters, Shirley Christie of Lethbridge, Alberta and Joy Munro of Kelowna, British Columbia, and many nieces and nephews. She is preceded in death by a third sister, Marion Dunbar, of Medicine Hat, AB. While Gwen spent the majority of her life in the U.S., she treasured her Canadian family, along with her family and friends in Wisconsin. In Racine, Gwen worked in the police department and Western Publishing, in addition to caring for her son and husband. Gwen went back to school and received her degree in Library Science from Gateway Technical College. She then worked for the Racine Unified School District, at the Gilmore and J.I. Case school libraries until her retirement. Gwen was a long-time member of Covenant Presbyterian Church. After retiring, Gwen donated her time to many causes, enjoyed church retreats, Bible study, and activities with her Red Hat friends. She loved to knit and crochet, and was well-known for her ‘scrubbers’. Funeral services will be held at Covenant Presbyterian Church, 40 Ohio Street, Racine, WI, on Friday, June 15, 2018 at 11:30 a.m. Gwen will be laid to rest at West Lawn Memorial Park. There will be a visitation at the church on Friday from 10 a.m. until time of service. In honor of her church family, donations toward the church children’s and choir programs are suggested in lieu of flowers. The family would like to thank the staff at Azura Memory Care (Oconomowoc), Oconomowoc Memorial Hospital, and Hometown Health Hospice for their loving care of Gwen.

Gwen Henningsen MOUNT PLEASANT - Gwendolyn Elizabeth Henningsen, 85, passed away on June 6, 2018. She was born in Olds, Alberta on April 14, 1933 to Warren and Mable (Roy) Kemp. She lived in Olds until 1956, and attended business school at... View Obituary & Service Information

The family of Gwen Henningsen created this Life Tributes page to make it easy to share your memories.

Send flowers to the Henningsen family.