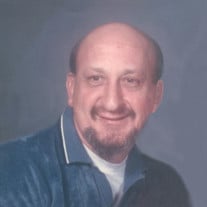 Harold D. Brown RACINE - Harold DeWitt Brown, 81, passed away on Thursday, June 7, 2018 at Visions of Life, surrounded by his loving family. He was born in Stephenson, MI on September 5, 1936, the son of the late Claude and Clara (nee: Neal) Brown. In September of 1958, Harold enlisted in the United States Army, where he served in Alaska. Harold was united in marriage to Anne Sorensen on July, 8, 1969, in Racine. He worked at the Racine Industrial Plant for 33 years as a parts manufacturer. Harold’s lifelong dream came true, when the Chicago Cubs won the World Series. He was a die-hard Chicago Cubs and Chicago Bears fan. Harold liked to do many things, but he loved spending time with his grandchildren the most. Harold is survived by his wife, Anne, children, Sharon (David) Dunn, Joseph (Julie) Brown, Larry Ridenour, Claudette (Daniel) Bronner, and Amy (Donavon) Johnson; grandchildren, Karen, Janet, Nicholas, Katrina, Elizabeth, Katrina, Katarina, Contessa, Justin, Cordelia, Kaitlynn, and Savannah. He is also survived by several great grandchildren; sisters, Gladys Petrovich, Delores (Howie) Boheim, and Judy Able, and brothers-in-law, Paul (Darlene) Sorensen and Donald Blaser. Harold is further survived by many nieces, nephews, other relatives, and dear friends. Harold was preceded in death by his parent; brothers, Clifford (Ruth) Brown, Raymond Brown, Claude (Charlotte) Brown Jr., and sisters, Iva (LeRoy) Vogt and Eunice Blaser. Funeral services for Harold will be held at Sturino Funeral Home on Saturday, June 16, 2018 at 11 a.m. with Chaplain Howard Edwards officiating. Service will conclude with full military honors. Visitation will be held on Friday, June 15, 2018 from 5 until 7 p.m. at the funeral home and on Saturday from 10 a.m. until service time at 11 a.m. Following services Harold will be laid to rest in a private ceremony. Nothing would please Harold more than to have everyone come in your favorite Chicago Cubs or Bears attire.

Harold D. Brown RACINE - Harold DeWitt Brown, 81, passed away on Thursday, June 7, 2018 at Visions of Life, surrounded by his loving family. He was born in Stephenson, MI on September 5, 1936, the son of the late Claude and Clara (nee: Neal)... View Obituary & Service Information

The family of Harold D. Brown created this Life Tributes page to make it easy to share your memories.