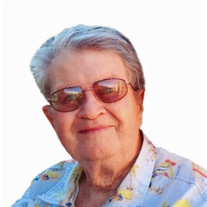 Harry W. Nielsen RACINE - Harry Warren Nielsen, 94, passed away on Tuesday, April 30, 2019 at Ascension All Saints Hospital. He was born in Racine on September 5, 1924, the son of the late Carl and Thominnie (Nee: Anderson) Nielsen. Harry proudly served his country in the United States Army during WWII. On January 24, 1953, he was united in marriage to Delores Marion Porter. Harry worked for Nielsen Iron Works as the Secretary Treasurer for 40 years, retiring in 1984. He was a long time member of Grace Lutheran Church. Harry was also a member of the Optimists Club, Elks Lodge, American Legion, and the VFW. Surviving are his children, Mark Nielsen, Larry (Laura) Nielsen, and Nancy Nielsen; grandchildren, Audrey, Andrew, Miah, and Nolan, cousin, Harriett Olson and former daughter-in-law, Sarah Nielsen. He is further survived by nieces, nephews, other relatives and friends. Harry was preceded in death by his wife, Delores on September 3, 1995, sister, Hazel (Robert) Rounds and brother, Clayton (Irene) Nielsen. Harry will be laid to rest at West Lawn Memorial Park in a private ceremony with full Military Honors. In lieu of flowers, memorials to VFW, Disabled American Veterans or a charity of one’s choice have been suggested by the family.

The family of Harry W. Nielsen created this Life Tributes page to make it easy to share your memories.

Send flowers to the Nielsen family.