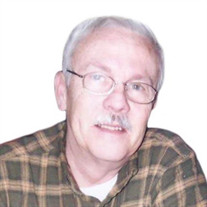 Harry G. Voss Jr. WIND POINT- Jesus gathered his beloved son, Harry George Voss Jr into his arms and took him home to Heaven on a beautiful sunny day. All anguish and frustration is gone. Harry’s life had been filled with adventure since childhood. He traveled around the world with his parents via steamer. He got to meet the ship captain and I’m sure he asked to steer the ship. India and Africa were such exciting ports of call. Always wanting to do above and beyond the normal. Yup – so Harry. In High School he was a guitarist in a band and recorded a record. He attended college in Nebraska and fell in love with flying. He became a pilot and enjoyed traveling to many places: Hawaii, Mexico, Jamaica, and Bahamas. He settled back home in Racine and attended MATC and began life as a machinist. Harry was an avid outdoorsman and owned many a sailboat during his life and sailed Geneva Lake and Lake Michigan with friends. He loved hunting and had a place in Rome, Wisconsin where he played lumberjack and Mr. fisherman. He met his wife Carol (nee: Gergel) Miller in 2005. They had many adventures up in Rome, Wisconsin and on Camelot Lake, even experienced a sinking boat after Harry forgot to put the drain plug back in. Lake Geneva was also a favorite place of Harry’s to take rides and eat out. In his last years Harry and Carol lived in their beloved Wind Point condo, surrounded by serenity and peace. He loved taking his dogs Bruno and Addie for their daily walks, hanging out by the pool, and talking to the neighbors. “Mr. Talkative.” He was a student of many, many subjects – from medicine, war, guns, snipers, art, the outdoors, and more; and achieved many certificates of accomplishments. The last years were a rough battle with dementia for Harry. To see him slowly drift away was heartbreaking. He will be dearly missed by his wife, Carol; half-sister, Rhoda Voss, daughter-in-law, Kristin (Tapp) and Michael Darwin of Summit, WI., grandsons, Joshua, and Gabriel. Daughter-in-law, Jennifer (Tapp) and Jacob Dallmann, of Union Grove, WI, granddaughter, Natalie, his dog, Addie; faithful friends; Steve and Debi Boguki, Kevin and Pam Ehnert, Sherry Salawater, The Strasser family, The Salawater family and the Lamberty family, in addition to other relatives and friends. Harry was preceded in death by his father, Harry Voss Sr. D.D.S, mother, Mildred (Johnson) Voss, half-sister, Paulene Mueller, and beloved dog, Bruno. Funeral services for Harry will be held at Sturino Funeral Home on Saturday, December 18, 2021, at 11:00 a.m. with Pastor Ed Walker officiating. Visitation will be from 9:30 a.m. until time of service. Carol would like to extend a very special thank you to the staff at Willowcrest Health Services for the care Harry received.

Harry G. Voss Jr. WIND POINT- Jesus gathered his beloved son, Harry George Voss Jr into his arms and took him home to Heaven on a beautiful sunny day. All anguish and frustration is gone. Harry&#8217;s life had been filled with adventure since... View Obituary & Service Information

The family of Harry George Voss Jr. created this Life Tributes page to make it easy to share your memories.

Send flowers to the Voss family.