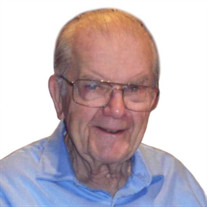 Henry B. Draves, 96, resident of Caledonia, passed away peacefully at his residence on Saturday, January 8, 2022, with his family by his side. Henry was a lifelong resident of Racine, born on October 30, 1925, the son of the late Harry and Lydia Draves. He was a graduate of Washington Park High School. Henry was drafted while still in high school. He was allowed to graduate before beginning his service in the United States Army Infantry. Henry was sent overseas to the European Theater and was wounded in action, taken as a prisoner of war for a short period time, and returned home. On July 6, 1954, Henry was united in marriage to Audrey D. Juhre. She preceded him in death on July 21, 2002, after 47 years of marriage. His working career began at Hamilton Beach, where he was a machinist for 19 1/2 years, then was employed at Racine Motor Inn as a night auditor for 10 years and later at Harris Metals, Inc. until his retirement. Henry enjoyed playing chess, traveling, fishing, and working in his backyard, tending to his garden. His favorite pastime was playing Schafskopf at St. Lucy Catholic Church. He is survived by his son and daughter-in-law, Rodney A. and Christina Thoennes-Draves; granddaughters, Alicia (Adam) Haines and Justine Draves; great grandson, Seth Haines; longtime neighbor and friend, Arnie Froode. Henry is further survived by nieces, nephews, other relatives, and friends. He was preceded in death by his siblings, Ida, Ethel, Bette and Richard. Funeral services will be held at Sturino Funeral Home on Saturday January 15, 2022, at 10:00 a.m. Visitation will be from 9:00 a.m. until service time. Henry will be laid to rest next to his wife at West lawn Memorial Park with full military honors. Special thank you to Nancy Scheiding and Phylis Hessenthaler for their compassionate care and devoted companionship these past months.

Henry B. Draves, 96, resident of Caledonia, passed away peacefully at his residence on Saturday, January 8, 2022, with his family by his side. Henry was a lifelong resident of Racine, born on October 30, 1925, the son of the late Harry and... View Obituary & Service Information

The family of Henry B. Draves created this Life Tributes page to make it easy to share your memories.

Henry B. Draves, 96, resident of Caledonia, passed away peacefully...

Send flowers to the Draves family.