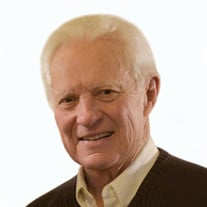 Jack Louis Christiansen, resident of Racine, passed away on Friday, May 7, 2021. Jack was born in Racine on July 28, 1937, the son of the late Clarence and Ruth (nee: Goodland) Christiansen. On February 23, 1963, in Racine, he was united in marriage to Margaret “Peggy” Jean Peterson. Jack was a member of The Lutheran Church of the Resurrection. He was a lithographer at Western Publishing Company, retiring in 1998. Jack was a proud member of the Graphic Arts International Union, Local 254. He was a member of the WI National Guard, Red Arrow Division, serving at Fort Lewis, WA during the Berlin Crisis in 1963. He enjoyed spending time at the family cottage, golfing with his son Peter, boating, and fishing with his daughter Sara, finally shooting a Hole-in-One at Ives Grove Golf Course in 2013.. A daily walk with his canine friend, Holly, was his favorite pastime. He will be deeply missed by his wife of 58 years, Peggy; loving daughter, Sara Jane Richards (Steve Schleicher) of Door County; nieces, Susan Schanstine, Virginia (Scott) Miller, Dianna (DJ) Butler, Chris Christiansen; nephews, Rev. Christopher (Donna Gardner) Manke of Wauwatosa, WI and Matthew (Christine) Manke of Brookline, MA. He is further survived by other relatives and friends. Jack was preceded in death by infant daughter, Jenny Margrethe in 1966; beloved son, Peter Andrew (age 23) on April 2, 1992; brother, Laurance (Betty Jo); sister-in-law and brother-in-law, Mary Jo and Bill Manke; in-laws, Andrew K. and Jane M. Peterson; step-father, Edmund Luckzys. Funeral services will be held at Lutheran Church of the Resurrection, 322 Ohio Street on Saturday, May 22, 2021 at 1:00 p.m. with Rev. Karen Pahl officiating. Visitation will be held at the church from 12 noon until service time. Private burial service will take place at Graceland Cemetery. In lieu of flowers, memorials in Jack's name are encouraged for Lutheran Church of the Resurrection, Outreachforhope.org (P.O. Box 341695 Milwaukee, WI. 53234) or the Racine County Humane Society. “May his life and memory bring Glory to God”.

Jack Louis Christiansen, resident of Racine, passed away on Friday, May 7, 2021. Jack was born in Racine on July 28, 1937, the son of the late Clarence and Ruth (nee: Goodland) Christiansen. On February 23, 1963, in Racine, he was united in... View Obituary & Service Information

The family of Jack Louis Christiansen created this Life Tributes page to make it easy to share your memories.

Jack Louis Christiansen, resident of Racine, passed away on Friday,...

Send flowers to the Christiansen family.