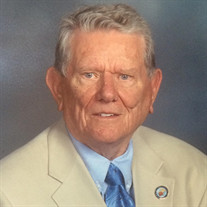 James H. Keck RACINE – James Hopkins Keck, 93, passed away at The Virginia Health and Rehab Center in Waukesha on September 11, 2018. He was born on September 14, 1924 in Mt. Vernon, Indiana, the son of the late Robert and Hattie Louise (nee: Hopkins) Keck. In Racine, on July 12, 1952, Jim was united in marriage to Edith J. Jensen after meeting her at a barn dance sponsored by the Y.M.C.A. Jim proudly served in the United States Navy during WWII, where he was stationed in the Pacific with The CASCU (Commander Aircraft Support Control Unit). In Jim’s early years he was employed at the family business, Keck-Gonnerman Foundry of Mt. Vernon, Indiana where steam engines and threshers were manufactured. He later was employed as a mechanical engineer at Massey Ferguson and retired from Jacobson Manufacturing, as a Senior Project Engineer. Jim was a charter member of Lutheran Church of The Resurrection, Christian Men’s Group, church board of trustees, Sunday school, church choir. He enjoyed traveling with Edith to Hawaii, Australia, New Zealand, Europe, and later, The Panama Canal. Jim was an avid wood carver, specializing in birds, which he shared with various school children. As a youth Jim and his brother Robert were involved in the Boy Scouts and attended the first Boy Scout Jamboree in Washington D.C. He found great enjoyment in mentoring as a Boy Scout Troop Leader, receiving the Silver Beaver Award for his exemplary leadership. Jim is survived by his son, Don (Christine) Keck of Plover, daughter, Eileen Keck of Racine; three grandsons, Dylan, Carl and Dean Keck, and one granddaughter, Marie Keck. He is further survived by one sister-in-law, Joanie Keck, in addition to nieces, nephews, other relatives and friends. Jim was preceded in death by his wife Edith on May 17, 2006; and two brothers Robert “Andy” and David Keck. Funeral services will be held at Lutheran Church of the Resurrection, 322 Ohio Street, on Wednesday, September 19, 2018 at 11 a.m. with Rev. Karen Pahl officiating. Jim will be laid to rest with full military honors at West Lawn Memorial Park. Visitation will be held at Sturino Funeral Home on Tuesday from 5:30 p.m. until 7:30 p.m., and will continue at church on Wednesday from 10 a.m. until time of service.

James H. Keck RACINE &#8211; James Hopkins Keck, 93, passed away at The Virginia Health and Rehab Center in Waukesha on September 11, 2018. He was born on September 14, 1924 in Mt. Vernon, Indiana, the son of the late Robert and Hattie Louise... View Obituary & Service Information

The family of James Hopkins Keck created this Life Tributes page to make it easy to share your memories.

Send flowers to the Keck family.